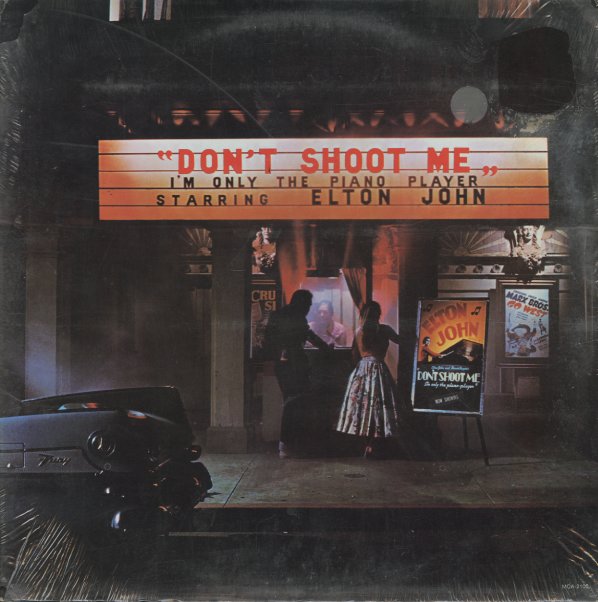 Don't Shoot Me I'm Only The Piano Player

Titles include "Daniel", "Blues For Baby & Me", "Midnight Creeper", "Elderberry Wine", "Have Mercy On The Criminal", "Crocodile Rock", and "High Flying Bird".  © 1996-2022, Dusty Groove, Inc.
(Sealed 70s gatefold MCA pressing! Cover has a cut corner, and shrink is partly open along the spine in one spot – but this copy has never been opened.)

11-17-70
Uni, 1971. Very Good+
LP...$9.99
A wonderful early record from Elton John – recorded live in the studio, and with a freer, more open vibe than some of his other albums! The approach is wonderful – and really showcases that sort of special spirit that Elton was creating with the group – but at a grittier level ... LP, Vinyl record album

Goodbye Yellow Brick Road
MCA, 1973. Very Good 2LP Gatefold
LP...$29.99 (CD...$4.99)
The crowning achievement of a young Elton John – and the record that took an already-great run of earlier records, and pushed it even further with a new depth of songwriting and imagination! The double-length set isn't exactly a concept album – at least not one with a unified narrative ... LP, Vinyl record album

Tumbleweed Connection
Uni, 1971. Very Good+ Gatefold
LP...$14.99
Elton back when he was genius, and unlike anyone else – with titles that include "Ballad Of A Well Known Gun", "Son Of Your Father", "Burn Down The Mission", "Love Song", and "Where To Now St Peter". LP, Vinyl record album