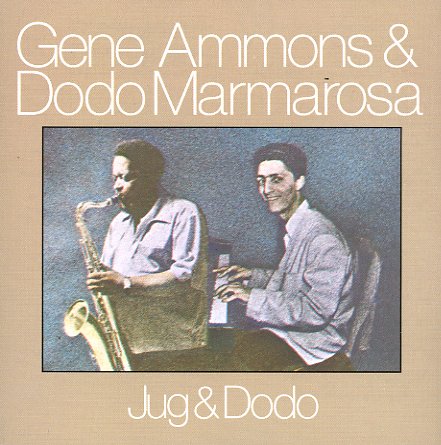 The first-ever issue of material recorded in Chicago in 1962 – a rare session by pianist Dodo Marmarosa, one that was to be his last on earth! Dodo's working with a trio that includes Sam Jones on bass and Marshall Thompson on drums – in a sad, almost bluesy style that's a wonderful maturation of ideas he was expressing during his bop years, and which is similar to his last album on Argo. Ammons joins in on tenor sax for about half the tracks on the session, and the material is presented here with a good set of liner notes that opens up a good bit of history on Dodo. Titles include "Just Friends", "Georgia", "For You", "The Moody Blues", "Yardbird Suite", "Bluzarumba", and "The Very Thought Of You".  © 1996-2023, Dusty Groove, Inc.
(Out of print.)

Soul
Prestige/OJC, 1958. Used
CD...$9.99
An excellent session! The record's filled with soul, emotion, and most of all, a hell of a lot of creativity – enough to show that Coleman Hawkins was still a great force to be reckoned with, even when labels were sticking him into loose blowing sessions like this! The group features Kenny ... CD

Workin' With The Miles Davis Quintet (20 bit remaster)
Prestige, 1956. Used
CD...$11.99 (CD...$1.99)
A record that hardly seems like workin at all, given the ease with which the group lays down the music – especially trumpeter Miles Davis, whose work here is like magic – and tenorist John Coltrane, who was really coming into his own with this recording! The set's one of a handful from ... CD

Here's Jaki
Prestige/OJC, 1961. Used
CD...$9.99
Important early work from Jaki Byard – one of his first records as a leader, and a wonderful set of quirky piano trio tunes! Jaki's working here with Ron Carter on bass and Roy Haynes on drums – in a format that's similar to other trio records of the time, but which is really pushed to ... CD

Soul Meeting
Prestige, 1960. Used
CD...$5.99
Rare early King Curtis jazz session – cut in the years before he settled down to his tight short soul instrumental recordings for Atlantic. The record is very much in the Prestige soul jazz style of the early 60s – and King's set up nicely in a group that features Nat Adderley, Wynton ... CD

Far Cry (plus bonus track)
Prestige/OJC, 1960. Used
CD...$8.99
Eric Dolphy's first meeting in the studio with trumpeter Booker Little – a brilliant batch of modernism that's easily one of the hippest records Little ever worked on! The Dolphy heard here is Eric at his most inventive – sharp-edged and angular one minute, then spiritually lyrical the ... CD

Gumbo! (plus unissued bonus tracks)
Prestige, 1963. Used
CD...$22.99
A stone classic from New Orleans reedman Pony Poindexter – a set that's steeped in tradition, but also has a groovy feel too – and a date that features Pony on both alto and soprano sax! The latter instrument is especially nice, played with echoes of earlier Crescent City modes, but ... CD