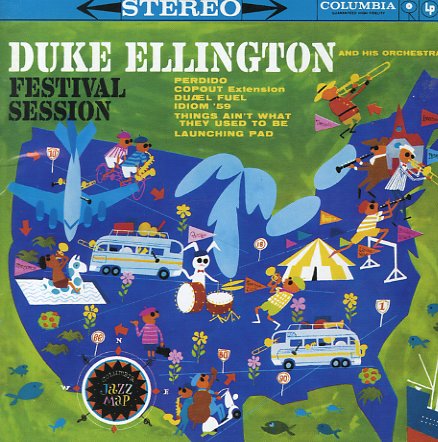 Duke Ellington in fine fine form – working here in a selection of tunes played at jazz festivals in 1959 – a very good year for the Ellington Orchestra! The styles here are a mix of older Duke modes and some of the more sophisticated modernism of his late 50s years – and performances are often long and open-ended, with just the sort of spontaneous energy the Ellington organization offered to live crowds of the time. Titles include the extended "Idiom 59", plus "Launching Pad", "Perdido", "Duel Fuel", "Copout Extension", and "Things Ain't What They Used To Be". Includes bonus tracks "VIP Boogie" and "Jam With Sam".  © 1996-2021, Dusty Groove, Inc.
(Out of print, small cutout hole through case.)