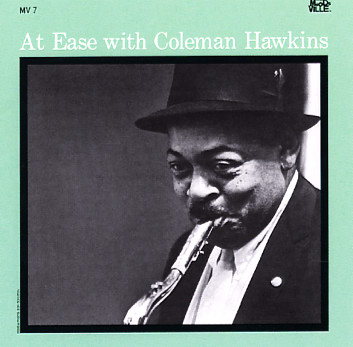 At Ease With Coleman Hawkins

Wonderful late work by Coleman Hawkins – a player who was very much "at ease" with himself at the time, and opened up tremendously on albums like this. The format is beautiful – simple small group backings by Tommy Flanagan, Wendell Marshall, and Osie Johnson – with Coleman out front, blowing these deep and mellow tenor lines that could stop a locomotive in its tracks! Titles include "At Dawning", "I'll Get By", "For You For Me For Evermore", and "Mighty Lak A Rose".  © 1996-2022, Dusty Groove, Inc.
(Out of print.)

Wrapped Tight
Impulse/MCA, 1965. Used
CD...$12.99
Great later Coleman Hawkins on Impulse – just the sort of deep-toned, soulfully-blown record that makes all his sessions for the label so great! Hawk's very firmly in the lead on that classic tenor of his – but the rest of the lineup keeps things swinging too – with Snooky Young ... CD