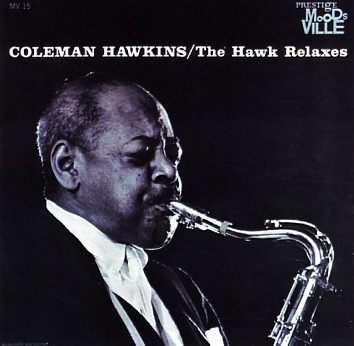 The Hawk Relaxes, but never lets himself go – and a set like this is a great illustration of the gentle genius that made so many later Coleman Hawkins records so great! The relaxed setting for this record is a perfect setting for Hawkins to open up and stretch out – working his tenor with a sound that has surprising modern edges, and unusual twists and turns, yet still all the careful economy of his better-known classic sides. There's a command of the instrument here that few other aging players ever seemed to muster – always a sense of new discovery and invention that marks the work strongly, even at a time when Hawkins could have been sitting on his laurels, playing the same old tune! Titles are all standards, but don't let that fool you – because there's plenty of magic in Coleman's versions of "Moonglow", "Just A Gigolo", "Speak Low", "When Day Is Done", and "I'll Never Be The Same". Oh, and we almost forgot – just because we're so focused on Hawkins – the other players include Ronnell Bright on piano, Kenny Burrell on guitar, Ron Carter on bass, and Andrew Cyrille on drums – making a surprising early appearance here!  © 1996-2021, Dusty Groove, Inc.
(Out of print.)

Mood Indigo/Swingville All Stars
Prestige, 1960/1961. Used
CD...$12.99
2 rare sessions from Prestige Records' Swingville label – both of which feature work from Ellington trumpeter Taft Jordan! The first date on the set was issued under Taft's own name – and is a great laidback set that shows Jordan in a completely different setting than the Ellington ... CD

Looking Ahead
New Jazz/OJC, 1960. Used
CD...$8.99
A legendary meeting of these two modernists – and a record that's filled with sharp-edged new ideas! Both Ken McIntyre and Eric Dolphy play alto and flute on the album – and Dolphy contributes a bit of bass clarinet as well – and the pair receive a bit of straighter backing than ... CD

Miles Smiles
Sony (Japan), 1966. Used
CD...$9.99 (CD...$2.99)
Miles Smiles, but his grin is a wry one – given the angular energy of the set! The album's a landmark effort from the mid 60s quintet that includes Wayne Shorter, Herbie Hancock, Ron Carter, and Tony Williams – all of whom work without fail to capture Davis' newly emerging approach to ... CD