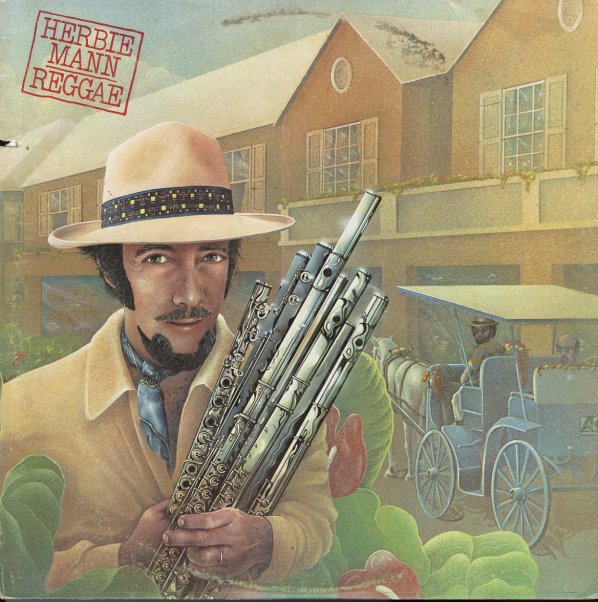 A surprisingly strong mix of 70s modes happening here – as the funky flute of Herbie Mann takes on some of the nascent reggae grooves of the time – with results that are a lot nicer than you might expect! There's some core rhythms on the record from Tommy McCook, but Herbie's regular keyboardist Pat Rebillot also adds in some surprisingly nice lines too – making the whole thing way more than just another session cut down in Kingston. One real surprise is a very extended take on "My Girl", which runs for over 18 minutes and takes up all of side two – and other cuts include "Rivers Of Babylon", "Swinging Shepherd Blues", and "Ob La Di".  © 1996-2022, Dusty Groove, Inc.
(Includes the printed inner sleeve.)

Great Mann
Verve, Late 50s/Early 60s. Very Good
LP...$3.99
Some great Latin work that Herbie cut for Verve at the end of the 50s – featuring tracks pulled from the Flautista album, plus others that showed up on a couple of other releases. Some tracks on the set are nice and long, others short and tight – with Herbie doing a snakey flute groove ... LP, Vinyl record album

Herbie Mann In Sweden (aka Mann In The Morning)
Prestige, 1957. Near Mint-
LP...$13.99
Different work than usual for Herbie – a series of sides recorded in Sweden in the late 50s, featuring Herbie on both flute and tenor! The feel here is at once more poised and more open than some of Herbie's US sides from the time – as the groups shift from track to track, and Herbie's ... LP, Vinyl record album

Herbie Mann Returns To The Village Gate
Atlantic, 1966. Very Good
LP...$7.99
A sweet early 60s set by Herbie Mann! After cutting a very successful side at the Gate in 1962, Herbie returns with an even broader approach to the groove – working here with players that include Ahmed Abdul-Malik, Dave Pike, Ray Mantilla, and Ray Barretto, on a set of long tracks that have ... LP, Vinyl record album

Herbie Mann Plays The Roar Of The Greasepaint, The Smell Of The Crowd
Atlantic, 1965. Near Mint-
LP...$3.99 5.99
A surprisingly great album from Herbie Mann – especially considering that it's based around a Broadway score! The set goes way beyond the source of the tunes, though – and Herbie's combo makes some great groovy magic out of the music – often with some sweet Latin touches, as you'd ... LP, Vinyl record album

Latin Fever
Atlantic, 1964. Very Good+
LP...$9.99
Herbie Mann's got Latin fever – and it makes for one heck of a great 60s album! The vibe here is more bossa nova than the New York Latin of the time – but that's OK with us, because Mann's flute is perfect in the setting – and really sparkles here on the album's tracks that were ... LP, Vinyl record album

Do The Bossa Nova With Herbie Mann
Atlantic, 1962. Very Good+
LP...$13.99
A great album of bossa groovers, recorded by Herbie in the early days of the US bossa boom – and with a sound that's right on the money! The backing's very lively, and the tracks have a tight bossa sound that's quite authentic. Herbie's flute is livelier than usual, and on a set like this, ... LP, Vinyl record album