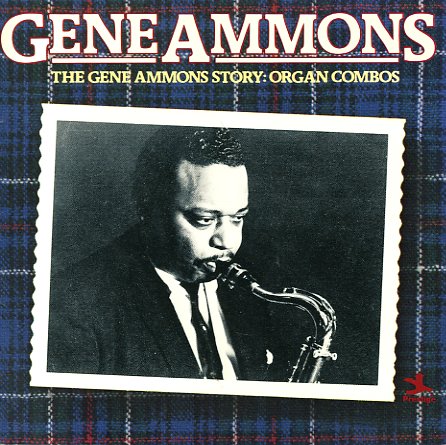 Also available
Gene Ammons — Gene Ammons Story – The Organ Combos ... LP 7.99
Our favorite side of Gene Ammons' talents – summed up nicely in a 2LP set! Ammons wasn't the first tenor player to work with a Hammond organ, but once the format gained popularity, Gene made a wise move to take it up – and it became a pairing that forever defined the later years of his sound! The 2LP set brings together a nice blend of ballads, groovers, and funky tunes recorded for Prestige with organists Johnny Hammond Smith and Jack McDuff during the 60s – titles that include "Born To Be Blue", "Twistin The Jug", "In Sid's Thing", "Blue Room", "Water Jug", "Getting Around", "Angel Eyes", "Stormy Monday", "Velvet Soul", and "Down The Line".  © 1996-2023, Dusty Groove, Inc.
(Out of print.)

Legends Of Acid Jazz – Black Cat!/You Talk That Talk!
Prestige, 1970/1971. Used
CD...$18.99
A pair of funky killers from tenorist Gene Ammons! Black Cat is one of the great funky albums that Gene Ammons cut for Prestige at the start of the 70s – quite different than his earlier work for the label, and a very different showcase for his tenor genius! The whole lineup here is amazing ... CD

Red's Blues
Prestige, Late 50s. Used
CD...$4.99
A cool collection of bluesy work from Red Garland – material pulled from the pianist's famous late 50s years on Prestige Records, including a number of cuts that weren't issued at the time of release! Some of the tracks here feature Garland working with a trio, while others have a horn ... CD

Beat Goes On
Prestige (Japan), 1965. Used
CD...$24.99
A fantastic album from Sonny Criss! The record is one of his excellent late 60s "comeback" sides for Prestige – and it features incredibly solid, confident, and hard alto solos, blown with a tremendous amount of imagination. Bob Cranshaw and Alan Dawson provide excellent rhythm ... CD

Gil Evans & Ten
Prestige/OJC, 1957. Used
CD...$8.99
Fantastic early work from Gil Evans – emerging here in this early session as an already far-thinking modernist. The tracks are shorter and less ambitious than some of Evans' work on Impulse, but the group is excellent – and even in a shorter format, the conception of the work still ... CD