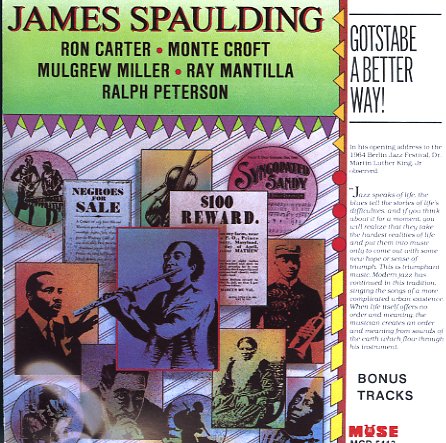 A well crafted set of tunes – both modern and soulful, in keeping with the rich talents of James Spaulding! The album sports a stupid title, but it's actually a thoughtful batch of tracks dedicated to African American achievement and expression – featuring Spaulding on alto sax and flute, in a group with Monte Croft on vibes, Mulgrew Miller on piano, Ray Mantilla on percussion, and Ron Carter on bass. Tracks are longish, and in a number of soulful modes – and titles include "Remember There's Hope", "Blue Hue", "Bold Steps", and "In Flight Out". CD also features 2 bonus tracks – "I Have You" and "Barbados".  © 1996-2022, Dusty Groove, Inc.
(Out of print.)