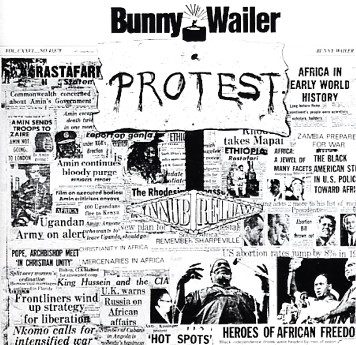 Late 70s solo effort from this founding member of the Wailers, self-produced on his own Solomonic label and then licensed to Island for worldwide distribution. A solid roots effort from one of the most significant moments in Jamaican music history, this album maintains Livingston's nicely crafted take on the heavily political roots rock that was both his and the Wailers' signature sound, and features backing from much of the Wailers band, though Robbie Shakespeare takes Family Man's bass spot. Includes a nice version of the Wailers' classic "Get Up, Stand Up", plus "Johnny Too Bad", "Follow Fashion Monkey", "Who Feels It", "Scheme Of Things", "Quite Trying", "Wanted Children" and "Moses Children".  © 1996-2021, Dusty Groove, Inc.
(UK Island pressing – orange label with blue edge. Includes heavy inner sleeve – a great copy!)

Blackheart Man
Island, 1976. Very Good Gatefold
LP...$19.99
The legendary solo debut of Bunny Wailer – a set that maybe marks him as the most righteous member of The Wailers! The style here is heavy on the roots tip, but there's also a special sort of vibe going on too – these warm currents that are laced with occasional touches of jazz, amidst ... LP, Vinyl record album

Uprising Live (3LP 180 gram orange vinyl pressing)
Eagle Rock/Tuff Gong, 1980. Near Mint- 3LP Gatefold
LP...$39.99
An extended live set, recorded during the last concert tour that Bob Marley ever gave the planet – material from a German concert in 1980, which also includes a bit of brief opening work from I Three too! Marley is at the top of his game here – really growing into that messianic role ... LP, Vinyl record album