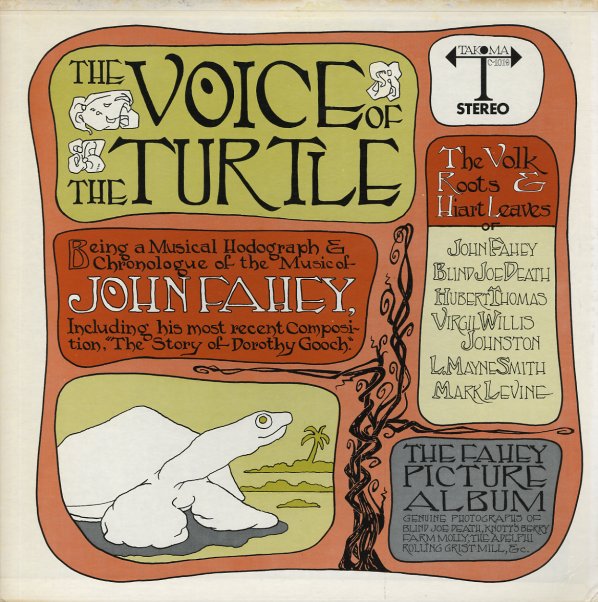 Voice Of The Turtle

A tremendous early statement from the great guitarist John Fahey – and a record that has all his best ideas coming into really sharp focus! Fahey was a very collaborative person right from the start – even as a record collector, before his own recordings – and that spirit is felt here on some of the duet tracks, in which John and associates perform these acoustic instrumental tunes that plumb the past of underground America, but turn it out again into something completely new and fresh – not folk revial, but more a reworked fantasy of the nation, almost as a refuge for the changes of the late 60s. The sound is beautiful – with a flute accompaniment here, a bit of fiddle there, and even Fahey duetting with himself on guitar – thanks to the magic of overdub. As usual with these early Takoma records, the style is very fluid – sometimes very tied to the 78rpm generation, but other points much more towards the freewheeling guitar introspection of some of Fahey's underground contemporaries. The overall sound is amazing, too – as Fahey almost uses the studio as an additional instrument, but in very subtle ways. Titles include "Bottleneck Blues", "Bill Cheatum", "Lewisdale Blues", "Bean Vine Blues", "A Raga Called Pat (part 3)", "A Raga Called Pat Part IV", "Train", "Je Ne Me Suis Reveillais Matin Pas En May", "The Story Of Dorothy Gooch (part 1)", "Nine Pound Hammer", and "Lonesome Valley".  © 1996-2020, Dusty Groove, Inc.
(70s black & gold label pressing in the gatefold booklet cover, with some wear, aging, and splitting in the bottom seam.)

Alone With You
RCA, 1966. Sealed
LP...$6.99
Fantastic early solo work from Jim Ed Brown – a singer we maybe like even better than in his work with The Browns! Titles include "Regular On My Mind", "A Taste Of Heaven", "Paint Me The Color Of Your Wall", "I Heard From A Memory Last Night", "You ... LP, Vinyl record album

I'm The One
RCA, 1972. Near Mint- Gatefold
LP...$59.99
One of the better albums by this offbeat jazz singer – and one that doesn't get as campy as some of her later records, although it's still got some pretty camp moments! There's some pretty darn cool electronics used to both process Annette's voice, and which were created by the voice. At ... LP, Vinyl record album