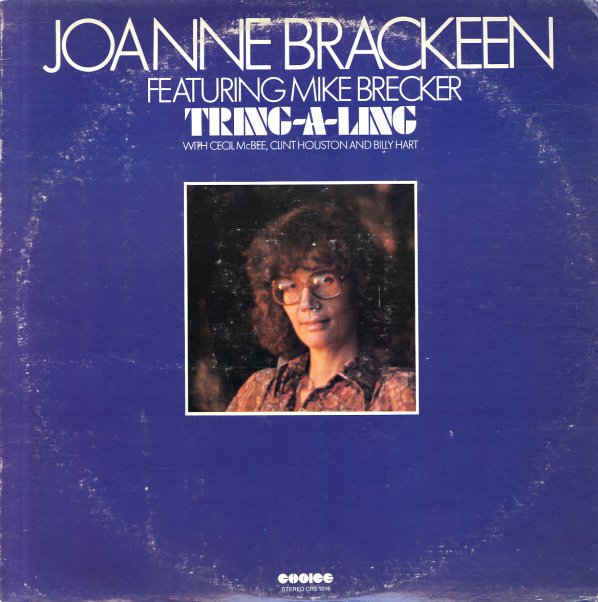 Pretty strong work from Joanne Brackeen – a great 70s trio set, with either Cecil McBee or Clint Houston on bass, and Billy Hart on drums – plus some guest tenor work by Michael Brecker, who's definitely at the sharper side of his spectrum! Brecker's tone here is raw and adventurous – much more so than on any of his own albums of the time – a perfect fit for Brackeen's strong work on the piano, which is very open and free flowing throughout. Titles include "New True Illusions", "Haiti B", "Echoes", "Fi Fi's Rock", and "Shadowbrook Aire".  © 1996-2022, Dusty Groove, Inc.
(Cover has light wear and a lightly bent corner.)

Snooze
Choice, 1975. Near Mint-
LP...$13.99
Dreamy open-ended tracks from pianist Joanne Brackeen – with a spiritual sound that almost reminds us of Alice Coltrane's best work on Impulse – and which represents a very different side of Brackeen's music than her better-known work with Stan Getz during the same time! Of course, the ... LP, Vinyl record album

Patterson's People
Prestige, 1965. Very Good+
LP...$29.99
A great groover from Don Patterson – cut in a trio format, with an open-ended style that lets the players kick back and play, in the sort of free and easy setting you'd hear in a hip small club. Patterson's organ is backed by his usual drummer Billy James, and 4 of the album's 5 tracks ... LP, Vinyl record album

At Basin Street
EmArcy, Mid 50s. Very Good+
LP...$23.99 (CD...$5.99)
About as classic as you can get for the Brown/Roach group – recorded at Basin Street with a group that includes Richie Powell on piano, Sonny Rollins on tenor, and George Morrow on bass. Tracks are tight and in that firey hardbop mode the pair pioneered – and titles include "Gertru ... LP, Vinyl record album