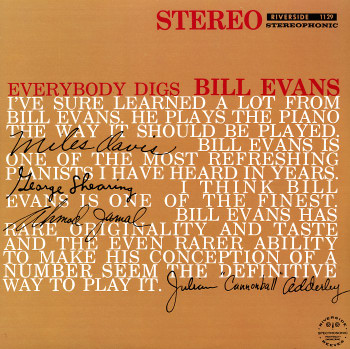 Everybody Digs Bill Evans – or at least it certainly seems that way from the cover endorsements by Miles Davis, Cannonball Adderley, and Ahmad Jamal – but the real proof is in the record, and the set is a great one from Bill's classic years on Riverside! Evans is at the peak of his early powers here – working with a straightforward rhythm combo that features Sam Jones on bass and Philly Joe Jones on drums – but still hitting those beautifully fluid, beautifully spacious lines that set his playing apart from most who'd come before him. Tracks include 3 solo numbers – "Lucky To Be Me", "Peace Piece", and the very short "Epilogue" – plus trio tracks "Night & Day", "Minority", "Tenderly", and "Oleo". Includes the bonus track "Some Other Time".  © 1996-2022, Dusty Groove, Inc.
(Out of print.)