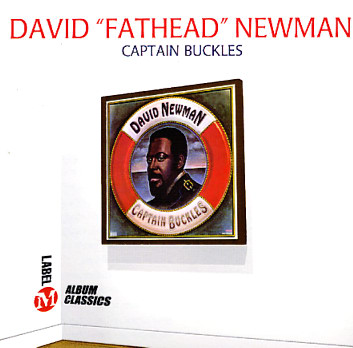 An excellent batch of straight ahead funk from David Fathead Newman! The record's a return to basics after a few more overly-produced sessions – and it features a stripped down quintet with Bernard Purdie on durms, Erick Gale on guitars, Blue Mitchell on trumpet, and Steve Novosel on bass. The overall feel is a bit in the Kudu funky mode – with plenty of electricity in the instrumentation – but Newman's gutsy solos over the top keep the whole thing clean and simple, more in the style of some of the Mainstream small group sessions from the time. Titles include "Blue Caper", "Captain Buckles", "Negus", "The Clincher", and "Joel's Domain".  © 1996-2021, Dusty Groove, Inc.

Captain Buckles
Cotillion/Atlantic (Japan), 1971. Used
CD...$11.99
An excellent batch of straight ahead funk from David Fathead Newman! The record's a return to basics after a few more overly-produced sessions – and it features a stripped down quintet with Bernard Purdie on durms, Erick Gale on guitars, Blue Mitchell on trumpet, and Steve Novosel on bass. ... CD