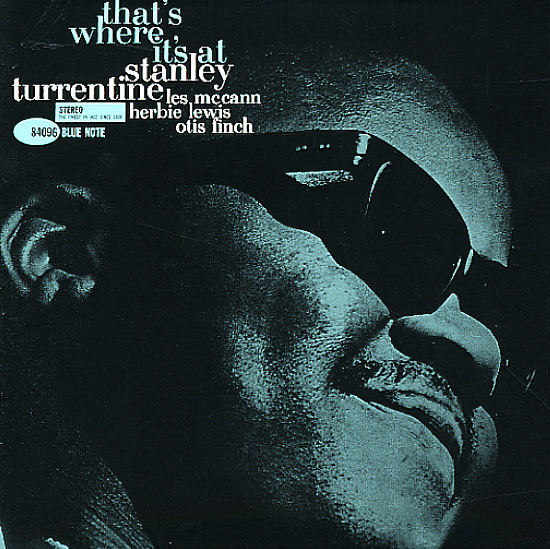 That's Where It's At (RVG remaster edition)

Where it's at with Stanley Turrentine – circa 1962 – a time when the tenorist was really hitting on all burners, and turning out some tremendous work for Blue Note! The album's got Stan working with a special guest – a rare Blue Note appearance from pianist Les McCann, who's also at the height of his early career here – and really brings great energy to a quartet that also includes Herbie Lewis on bass and Otis Finch on drums. Les' piano has a nice bit – and really makes for a great groove alongside Stan's round, warm, raspy tone – a righteous sort of energy that drives the record strongly, in ways that are different than some of Turrentine's other sessions of the time. The whole thing's a cooker – and titles include "Pia", "Smile, Stacey", "Dorene Don't Cry I", and "Light Blue". CD also features a bonus take on "Light Blue".  © 1996-2021, Dusty Groove, Inc.
(Out of print.)

Sugar/Gilberto With Turrentine/Salt Song (with bonus tracks)
BGO (UK), 1971. Used 2 CDs
CD...$9.99
3 classic albums Stanley Turrentine! Sugar was a big hit for Stanley and a pretty darn nice record of extended groovers, with a harder sound than you might expect! The original record's only got three cuts – all done in a mode that sounds a lot more like harder Prestige sessions from the ... CD