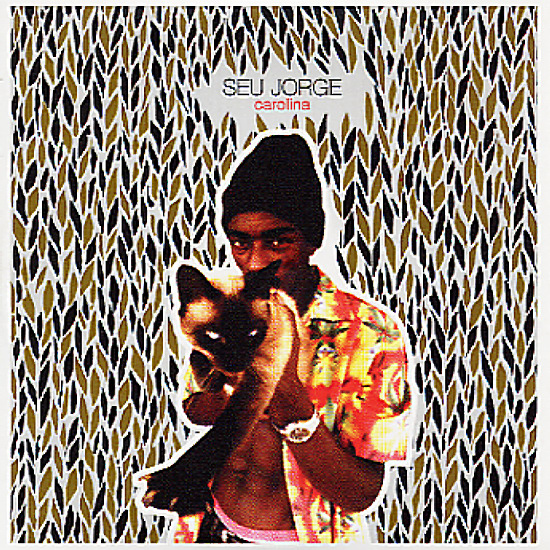 A HUGE batch of samba-soul grooves from Seu Jorge! Jorge previously knocked around Brazil as a member of the late 90s pop group Farofa Carioca, but his first solo outing is a massive step forward into the upper echelon of the Brazilian scene! Like the best of his contemporaries, Jorge uses the rich history of samba and bossa as a springboard – but it's the pronounced contemporary qualities, such as production and mix work by Beastie Boy producer Mario Caldato – that push Carolina way over the top and make it much more than a genre exercise! The title track echoes the earlier work of Jorge Ben, who actually pens the reggae-inflected tune "Em Nagoya Eu Vi Eriko", and the tracks "Mangueira" and "O Samba Tai" have the classic samba groove and crisp background vocals that would sound right in place on Tom Ze's Se O Caso E Chorar. "Hagua" has a deep reggae thump, and nearly everything here has kind of a 70s soul feel thanks to some bright, almost Kool & The Gang-like horn arrangements! The group includes Azymuth drummer Mamao, Paulinho Black on bass, Banda Black Rio's William Magalhaes on keyboards, and Josimar Monteiro on violin. Another great new solo artist from Brazil, and one that we expect amazing things from in the years to come!  © 1996-2022, Dusty Groove, Inc.

Alucinolandia
Hot/Mr Bongo (UK), 1969. New Copy (reissue)
LP...$24.99 27.99
Definitely a set to make you hallucinate – as the grooves are quite groovy, but in a really trippy way! The album's a bit like the classic Psicodelico set by Luiz Carlos Vinhas – a mix of older samba modes and wigged-out 60s sounds – sometimes odd production, sometimes offbeat ... LP, Vinyl record album