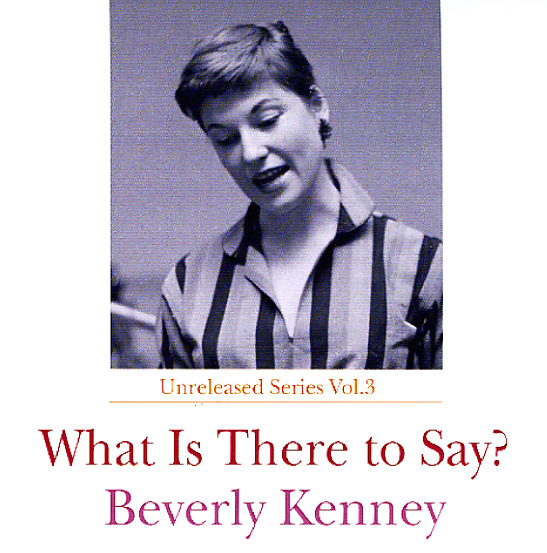 What Is There To Say? (Japanese paper sleeve edition)

Rare work from 50s vocalist Beverly Kenney – a selection of material that stands nicely alongside her commercially-released albums of the time! Kenney first burst on the scene with a flourish, then recorded only briefly before her all-too-soon death in 1960 – so the unreleased gems here really do a lot towards filling in her small catalog of music – and offer up some surprising slices of work pulled from TV and radio performances in 1954 and 1958. Backing is by a group with Roland Hanna on piano and Vinnie Burke on bass on some tracks – and by The Skitch Henderson Orchestra on others – and titles include the Kenney originals "I Hate Rock & Roll" and "I Don't Believe In Love" – the latter of which is sung by Diane Hubka, in a recent performance added to this package. Other vintage songs include "The More I See You", "Swing & Sway", "Charleston Fling", "I'm Ready For The Show", "Tappin Out A Merry Beat", and "What Is There To Say" – plus a short interview with Beverly.  © 1996-2022, Dusty Groove, Inc.
(HQ – Hi Quality CD pressing!)

Speak Low – Pinky Winters Sings, Lou Levy Plays (Japanese paper sleeve edition)
Cellar Door/SSJ (Japan), 1983. Used
CD...$19.99
A beautiful collaboration between vocalist Pinky Winters and pianist Lou Levy – the second half of the live date that was partially issued on the album Shadow Of Your Smile – recorded back in 1983, but making its world premiere here! There's a mellow, intimate feel to the record that ... CD

Water
Motema, 2010. Used
CD...$7.99
Gregory Porter's a hip little singer – just the sort we love to discover in jazz, and the type that only comes around once in a blue moon! Like Jon Hendricks, Mark Murphy, or Kurt Elling – all perfect references for Porter's style – Greg has a wonderful way of coming up with his ... CD