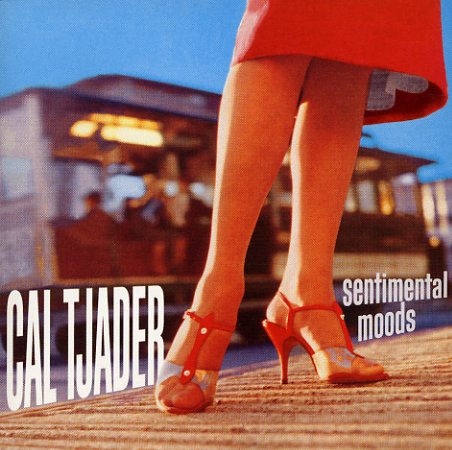 Latin For Lovers is sublime mellow work from Cal – vibes mixed with strings mixed with Latin percussion – a nicely laidback take on his classic 50s sound! The core group is still one of Cal's Latin best – with Mongo Santamaria and Willie Bobo on percussion – and many tracks have some great flute work by Paul Horn, snaking through the mellower grooves with a sound that's sad and soulful. Titles include "Stella By Starlight", "Ode For Margo", "Martha", "Spring Is Here", and "Star Eyes". San Francisco Moods is a nice album of lyrical groovers by this master vibist – played with more of a jazz feel than Cal's 60's Latin sessions – and it's based around a nice set of original tracks dedicated to San Francisco. Bay Area guitar legend Eddie Duran plays with Cal's group on the session, and titles include "Skyline Waltz", "Coit Tower", "Running Out", "Racoon Straits", and "Sigmund Stern Groove".  © 1996-2021, Dusty Groove, Inc.

Tjader Plays Tjazz
Fantasy/OJC, 1955. Used
CD...$11.99
The title gets it right on this one – as the set's one of Cal's greatest straight jazz albums of the early years – done in a harder, and more soulful mode than some of his Latin-based sets from the time! The album features 2 different groups, both of them great – a main quintet ... CD

Soul Sauce
Verve, 1964. Used
CD...$22.99
Arguably THE classic Cal Tjader album of the 60s – a landmark album that crossed over equally into Latin, jazz, and mainstream audiences – and a stone cooker that's filled with smoking little grooves! The set's probably best known for its title track "Soul Sauce" – one ... CD

Red Norvo Trio
Fantasy/OJC, 1954. Used
CD...$4.99
Great lean grooves from vibist Red Norvo – exactly the kind or record that shows why he was such an amazing talent on his instrument in the 50s! The album has Red working without piano or drums – just the guitar of Jimmy Raney and bass of Red Mitchell – both players who are ... CD

Jazz At Oberlin
Fantasy/OJC, 1953. Used
CD...$4.99
A classic album from Dave – recorded at Oberlin College, the mid-Ohio haven of bohemiana, and a growing hotbed of jazz activity centered around students in the college's conservatory of music. Dave and crew made the trip at the request of the kids – breaking from their mostly San ... CD