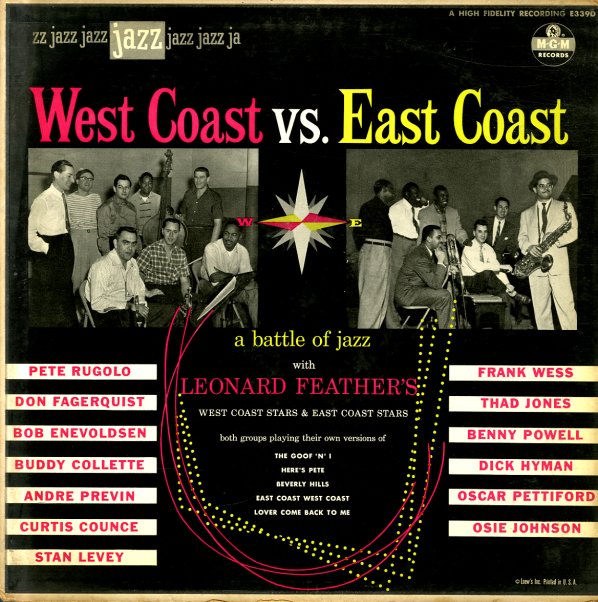 Leonard Feather organized session that pits West and East coast players together in a mock "battle" that takes up a side of the record for each coast. Playing for the East are Frank Wess, Benny Powell, Thad Jones, and Oscar Pettiford. Playing for the West are Don Fagerquist, Bob Enevoldsen, Buddy Collette, and Stan Levey. Guess who wins!  © 1996-2022, Dusty Groove, Inc.
(Mono yellow label pressing. Vinyl plays with some surface noise, crackles, and some marks that click. Cover has some wear and aging, aged tape holding the seams, and splittting in the spine.)

Prelude To Blues
MGM, Late 50s. Near Mint-
LP...$9.99
Sam "The Man" Taylor sneaks in with a silky set of tenor tunes, all lightly sanded down for smooth late-nite listening! Titles include "Blues In Advance", "I Miss You So", "Fools Rush In", "Blue Prelude", and "A Touch Of The Blues". LP, Vinyl record album

Buddy DeFranco (MGM)
MGM, Early 50s. Near Mint-
LP...$11.99
Excellent work from Buddy Greco's years on MGM – material that dovetails nicely with his boppish work for Verve in the early 50s, with equally nice small combo backing that includes Kenny Drew on piano! There are a couple of De Franco originals such as "Pennywhistle Blues" and ... LP, Vinyl record album

Modern Clarinets – Buddy DeFranco With Strings/Modern Jazz
MGM/Verve (Japan), Early 50s. Near Mint-
LP...$11.99
A very cool Japanese-only album – one that brings together two rare 10" releases by these modern jazz giants of the clarinet! Side one features Buddy DeFranco with some larger backings, but a core group that also features Kenny Drew on piano, Art Blakey on drums, and Sabu Martinez on ... LP, Vinyl record album