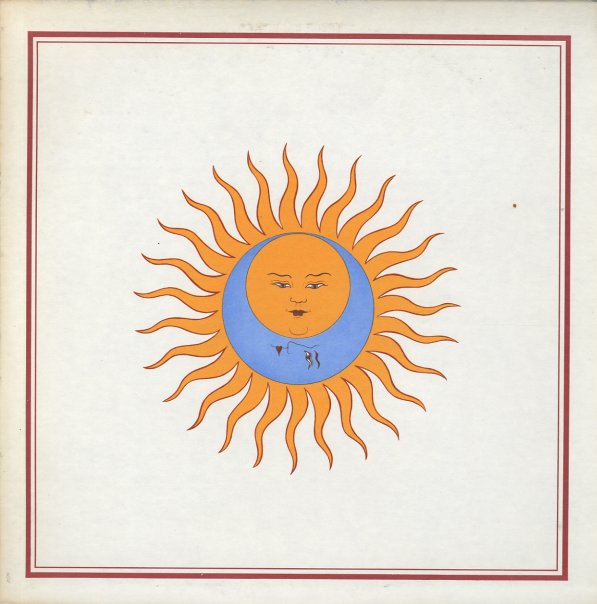 For some folks, this might be the purest moment of sonic genius from King Crimson – a record that has this incredible dynamic range, with ultra-low passages followed by soaring highs – all delivered by a group that might well be one of the most technically skilled that Robert Fripp had put together by the time! Fripp himself handles many guitars and devices – alongside drums from Bill Bruford, viola and violin from David Cross, percussion from Jamie Muir, and superb bass and vocals from John Wetton – who really gives the group a focus and soul that balances out he geekier technical moments. Titles include the soaring two-part title track – plus "Easy Money", "Talking Drum", "Book Of Saturday", and "Exiles".  © 1996-2022, Dusty Groove, Inc.
(Broadway label pressing with RI suffix. Includes the printed inner sleeve. Cover has some wear and aging, with some splitting in the top seam.)

Islands
Island (UK), 1972. Near Mint-
LP...$43.99
One of our favorites by King Crimson – and a record with a lot more jazz than some of their others! Players include Mel Collins on lots of flutes and saxes – plus guests Keith Tippett on piano, Mark Charig on cornet, and Harry Miller on bass! LP, Vinyl record album

Islands (Atlantic)
Atlantic, 1972. Very Good+ Gatefold
LP...$29.99
One of our favorites by King Crimson – and a record with a lot more jazz than some of their others! Players include Mel Collins on lots of flutes and saxes – plus guests Keith Tippett on piano, Mark Charig on cornet, and Harry Miller on bass! LP, Vinyl record album

In The Wake Of Poseidon
Atlantic, 1970. Near Mint- Gatefold
LP...$39.99
A wonderful second record from King Crimson – a set that follows in the same territory as the debut – with Greg Lake on vocals and Robert Fripp on guitar and devices – alongside Michael Giles on drums and Peter Giles on bass. There's some great jazzy touches at times – ... LP, Vinyl record album

Three Of A Perfect Pair
Warner/EG, 1984. Very Good+
LP...$29.99
The last of the "revival" King Crimson from the early 80s – featuring the lineup that included Robert Fripp, Adrian Belew, Bill Bruford, and Tony Levin. The style is fairly academic, but Belew's presence still gives the record a bit of heart – something that Fripp had trouble ... LP, Vinyl record album

Physical Graffiti (180 gram 3LP deluxe edition – with bonus tracks)
Atlantic, 1975. Near Mint- 3LP
LP...$49.99
Led Zeppelin at their most sprawling – in both ambition and in the pacing – on the gargantuan Physical Graffiti! This is the album where they started bringing some odd synth textures to the sound, and it's to Zeppelin's eternal credit that this doesn't compromise their blues-reverent ... LP, Vinyl record album