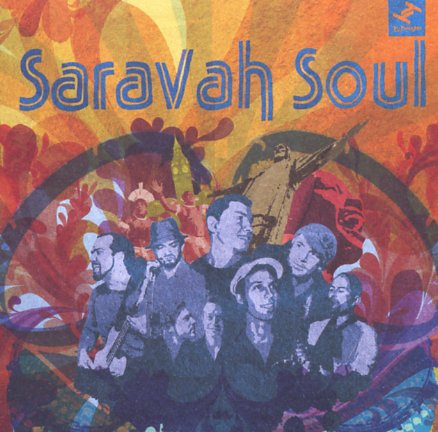 A whole new dimension in deep funk – Brazilian-tinged tunes served up by members of The Heliocentrics and Quantic Soul Orchestra! The sound here lives up to the best Samba Soul modes of 70s Brazil – grooves that are rooted in American traditions of funk and soul, particularly those of the James Brown generation – but which also feature bits of Brazilian instrumentation, especially in the percussion – plus some lyrics in Portuguese too! Given the pedigree of the players, you can bet that the music's all plenty top-shelf – and the album's the kind of set that really raises the bar for contemporary funk. Titles include "Oil Is Thicker Than Blood", "Nao Posso Te Levar A Serio", "Roubada", "Funk E Saravah", "It's Doing My Head In", and "Supersossego".  © 1996-2021, Dusty Groove, Inc.

Tradition In Transition
Tru Thoughts (UK), 2009. Used
CD...$4.99
Damn! Quantic really blows the roof off with this one – taking us even farther on a musical journey than ever before, and making us bow to his mighty talents in ways we never expected! The album's a really unique session recorded in Colombia, with help from an international batch of ... CD

Side Stepper
Tru Thoughts (UK), 2008. Used
CD...$6.99
No side-stepping these grooves – as they're right, tight, and very much on the money – work that shows a real evolution in the sound of The Bamboos, and one that takes them strongly into deep soul territory! These guys have always had a great ear for classic funk, but this time around ... CD

Tales From Beyond The Groove
Tru Thoughts (UK), 2003. Used
CD...$9.99
A killer batch of blue eyed funk – one that takes the Quantic Soul sound to the next level! The Limp Twins are Will Holland, of Quantic and Quantic Soul fame, plus vocalist Russell Porter – a singer with a sweetly compressed style that works perfectly with Holland's funky backings! ... CD