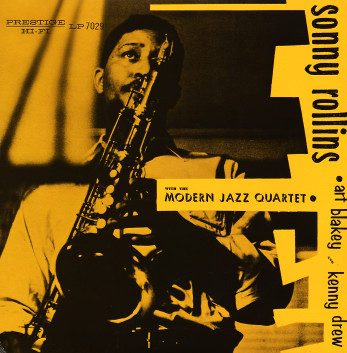 Also available
Sonny Rollins — Sonny Rollins With The Modern Jazz Quartet (20 bit remaster) ... CD 8.99
Early Sonny Rollins work for Prestige – recorded in the years 1951 and 1953, in a variety of settings! 4 tracks on the album features Rollins blowing with the MJQ, one more has him working with a Miles Davis group, and the last 8 feature a quartet with Kenny Drew, Percy Heath, and Art Blakey. The tunes are shorter than you might be used to hearing Rollins, but there's still plenty of power and imagination in the grooves – very economical solos, crafted with a great deal of imagination. Titles include "Scoops", "Shadrack", "Mambo Bounce", "The Stopper", "I Know", and "No Moe".  © 1996-2022, Dusty Groove, Inc.
(OJC pressing.)