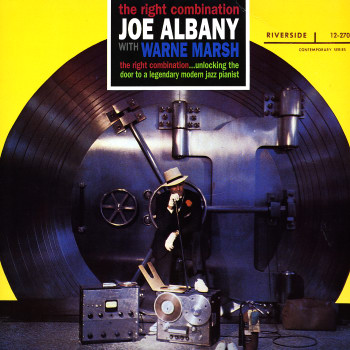 A teaming of two modern jazz talents from differing generations – one, pianist Joe Albany, rediscovered and re-recorded here after a number of years of obscurity during the 50s – the other, Warne Marsh, an emerging genius with one of the best tenor tones of his generation. The pair play together in an unusually spare setting – with no drums, and only bass work by Bob Whitlock for extra accompaniment. A real standout in the Riverside catalog – and recorded in LA, which makes one more distinction from the label's mostly New York output. Titles include "Daahoud", "Body & Soul", "I Love You", and "It's You Or No One" – and the record's a great one to hear Marsh in an unbridled setting.  © 1996-2021, Dusty Groove, Inc.
(Out of print.)

Everybody Likes Hampton Hawes – Vol 3 The Trio
Contemporary/OJC, 1956. Used
CD...$6.99
Maybe the title's a bit overly-optimistic – but with a record like this, you can certainly imagine a world in which everybody does like Hampton Hawes! The record's the third in a legendary early run for the Contemporary label – trio material that broke Hawes out of the box and firmly ... CD

For Someone I Love – Milt Jackson & Big Brass
Riverside, 1963. Used
CD...$24.99
A surprisingly nice pairing – the vibes of Milt Jackson and some larger horn backings that fall heavy on the trumpet and trombone side of the spectrum! The sound's not nearly as heavy or hokey as you'd expect – thanks to arrangements by Melba Liston – and the horns do a nice job ... CD

Merry Olde Soul
Riverside/OJC, 1960. Used
CD...$16.99 (LP...$19.99)
One of the best Victor Feldman albums recorded in the US – a really solidly swinging set of tunes, cut in New York with a hip trio that includes Sam Jones on bass and Louis Hayes on drums – plus Hank Jones on piano, on the few tracks of the album that feature Feldman playing the vibes! ... CD