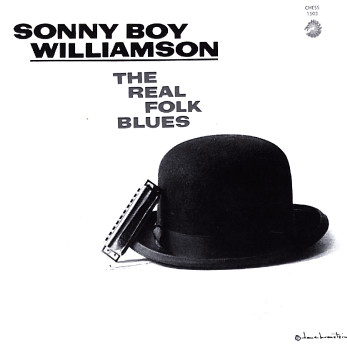 Also available
Sonny Boy Williamson — Real Folk Blues ... LP 16.99
Not as folksy as you might think from the title – thanks to a really powerful presentation by Sonny Boy Williamson! The style here has echoes of Bo Diddley or Jimmy Reed's sense of rhythm – a more upbeat and electrified Chicago approach than Chess was serving up a decade before – obviously influenced by the strength of R&B, but also still presented with a sound that's stripped-down and raw enough to be called blues. Players on the sessions include Matt Murphy and Luther Tucker on guitars, Willie Dixon on bass, Otis Spann on piano, and Lafayette Leake on organ – and titles include "One Way Out", "Too Young To Die", "Trust My Baby", "Peach Tree", "Down Child", "Bring It On Home", "Too Old To Think", and "Got To Move".  © 1996-2023, Dusty Groove, Inc.
(Out of print.)

Best Of Little Walter
Chess/MCA, Early 50s. Used
CD...$2.99
A well-titled set – as the album features some of the best early sides that Little Walter recorded for Chess – records that went on to set a whole new standard both in blues vocals and harmonica! There's tightness here that's a bit different from some of the other Chess blues at the ... CD

Brass & The Blues
Chess, 1966. Used
CD...$9.99
A unique mid 60s Chess session from Muddy Waters – one with a very different feel than usual, and a good dose of soul too! As you might guess from the title, Muddy gets some full backings on this set – not exactly a large brass section, but a set of Chicago soul-styled backings handled ... CD