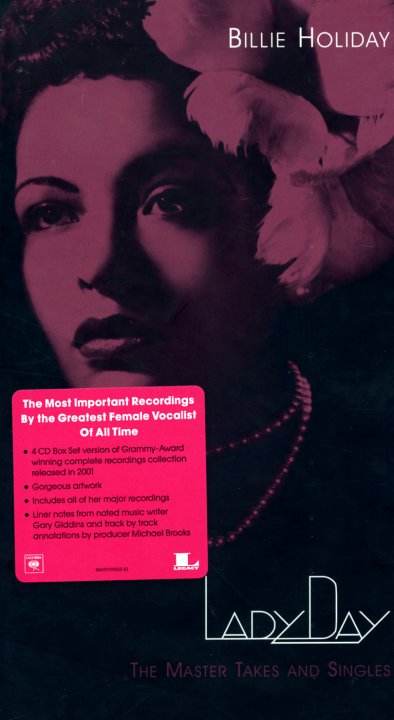 A nicely-slimmed version of the previous Lady Day Complete Billie Holiday On Columbia set – one that pares down the bigger collection to a 4CD set that focuses only on the master takes for each tune, plus singles – thus really getting to the heart of Billie's genius at the time! Even so, the 4CD package still features a whopping 80 tracks in all – a heck of a lot of material recorded by Holiday for Columbia during the years 1933 to 1944 – and served up here with great artwork, track by track notes, and liner notes by Gary Giddins. Titles include "I Wished On The Moon", "You Let Me Down", "If You Were Mine", "Me Myself & I", "Sugar", "Long Gone Blues", "Some Other Spring", "All Of Me", "Let's Do It", "Loveless Love", "It's A Sin To Tell A Lie", "Swing Brother Swing", "Them There Eyes", "Easy Living", "That's Life I Guess", "They Can't Take That Away From Me", "Mean To Me", and "Why Was I Born".  © 1996-2022, Dusty Groove, Inc.
(Out of print.)

Songs For Distingue Lovers (Japanese pressing)
Verve/Universal (Japan), 1957. Used
CD...$24.99
Classic Verve work by Billie Holiday – and an album that probably brought the word "distingue" into the vocabulary of more people than any other use! (And in fact, probably also caused a lot more trouble with mispronunciation than any other Billie Holiday album title!) The tracks ... CD