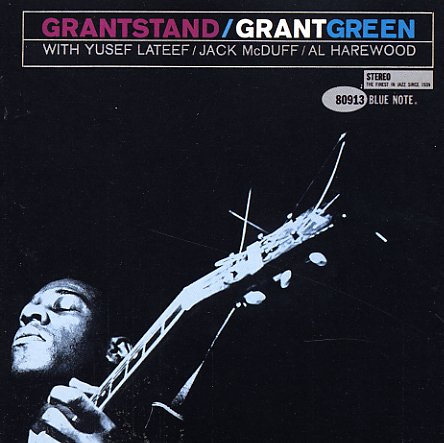 An early moment of genius from the great Grant Green – a set that's a real standout from his other Blue Note albums of the time – even though all of those are plenty darn great as well! Grant's working here with an unusual group – Yusef Lateef on tenor and flute, making a rare Blue Note appearance, and playing with a very soulful, very hardbop edge – and the excellent Jack McDuff on Hammond – a musician who wouldn't show up more at the label for a few more years! Tracks are nice and long, with an open, loping rhythm that's perfect for all three soloists – thanks to Al Harewood on drums, who really helps open things up for Green. Titles include "Grantstand", "My Funny Valentine", "Blues In Maude's Flat", and "Old Folks" – all done in nicely relaxed takes.  © 1996-2022, Dusty Groove, Inc.
(First 1987 CD pressing. Spine has a small cutout notch.)

Feelin' The Spirit (non-RVG edition)
Blue Note, 1962. Used
CD...$4.99 (LP...$36.99)
Guitar genius Grant Green is definitely feelin the spirit here – as he mixes his lean 60s style with a host of traditional numbers from the spiritual canon – at a level that provided a whole new sense of soul at the time! There was plenty of music influenced by gospel during the decade ... CD

Brown Sugar (Japanese pressing)
Blue Note (Japan), 1964. Used
CD...$24.99
Smoking work on Hammond from Freddie Roach – a key player in the Blue Note lineup of the 60s, and a strong link between the label's soul jazz and modern sides! The sound here is a really beautiful one – partly in the organ/tenor mode forged by Baby Face Willette and John Patton in ... CD