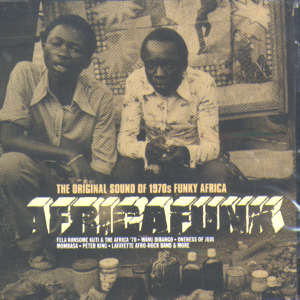 An outstanding compilation that should do for African funk what the Nu Yorica set did for Latin grooves. Harmless have put together a double-length set of 13 rare hard cuts from the 70's, including many classics that you might know, but which sound superb in this tight setting. With "Hail the King" by Wali & The Afro Caravan, "African Battle" by Manu Dibango, "Megaton" by Veccio, "Netsanet" by Mulatu Astaqe, "Malik" by Lafayette Afro Rock Band, "Ajo" by Peter King, "African Rhythms" by Oneness Of Juju, and lots lots more!  © 1996-2022, Dusty Groove, Inc.
(Out of print.)