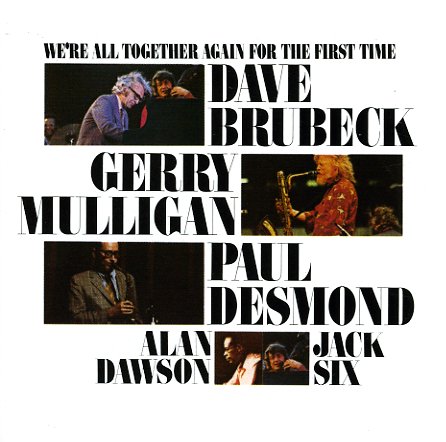 Also available
Dave Brubeck — We're All Together Again For The First Time ... CD 4.99

Kind of a meeting of two different generations of Dave Brubeck – as the group here features Paul Desmond's alto sax, a key force in Dave's early recordings – and the baritone sax of Gerry Mulligan, a player who'd worked often with Brubeck in the late 60s and early 70s! The blend of horns is really amazing, and the live recording really moves past other obvious Brubeck modes – showing Dave's whole new conception after the breakup of the original quartet – and his willingness to open into new rhythms, and even freer modes of expression. Mulligan's baritone is wonderfully powerful – coming across here with a depth that we'd hardly have expected a few years before – and rhythm is from Jack Six on bass and Alan Dawson on drums, both players who also add to the transformation of the Brubeck groove. Titles include "Koto Song", "Unfinished Woman", "Truth", "Take Five", and "Rotterdam Blues".  © 1996-2022, Dusty Groove, Inc.
(1841 Broadway label pressing.)

Ornette!
Atlantic, Early 60s. Sealed
LP...$49.99
A stunning session by Ornette, and one that always seems to get overlooked in discussions of his albums for Atlantic! His quartet here features the amazing Scott LaFaro on bass, and a young Ed Blackwell on drums – both of whom give the tracks an amazing pulse that brings new energy out of ... LP, Vinyl record album

Heads Up
Atlantic, 1987. Near Mint-
LP...$7.99
A much more straightforward album than some of David Newman's previous records – a stripped-down, small combo acoustic jazz album – one that's quite different from the funkier and more electric work that Newman recorded back in the 70s. The style is one that almost takes Newman back to ... LP, Vinyl record album

Afro-desia
Groove Merchant, 1975. Near Mint- Gatefold
LP...$29.99
Excellent work by Lonnie Smith – a free-flowing album of long jazzy grooves that's kind of an extension of his Blue Note albums, touched with more of the electricity of his 70s playing! There's some killer rhythms on the album – courtesy of drummers Jamey Hudad and Ben Riley, and ... LP, Vinyl record album

Green Blues (aka Reaching Out)
Muse, 1961/Late 70s. Near Mint-
LP...$34.99
A fantastic record from Grant Green's important early years – originally recorded for the Jazztime label in 1961 (and released under Dave Bailey's name), reissued in this form in the 70's by Muse. The set is headed up by drummer Dave Bailey – a set that's almost better than his classic ... LP, Vinyl record album

80 Below '82
Antilles, 1982. Near Mint-
LP...$24.99
An essential session from the Threadgill/Hopkins/McCall trio from Chicago. The album features long compositions in the group's best tradition – and a good mix of out playing with more spiritual concepts, in a strong AACM tradition. Titles include "Chicago Breakdown", "The ... LP, Vinyl record album