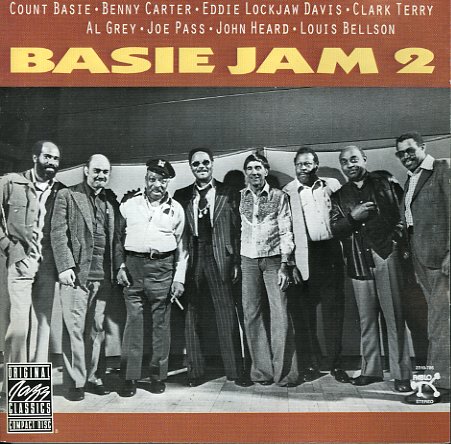 Basie Big Band (Japanese paper sleeve edition)
Pablo (Japan), 1975. Used
CD...$11.99 19.99
The Basie band is plenty big here – but never too much so to lose their confident swing of earlier years! The Count is still firmly at the helm at the time of this recording – leading and playing keys with that spacious, stepping quality that makes a Basie number of the later years ... CD

On My Way & Shoutin Again – Count Basie Plays Music By Neal Hefti
Verve, 1962. Used
CD...$6.99
A wonderful album of 60s Basie – one that focuses on the writing and arranging talents of the great Neal Hefti! Hefti's one of our favorite soundtrack composers of the decade, but in the years before his film fame, he was a frequent partner of Basie – and this album marks one of their ... CD

Basie In Sweden
Roulette, 1962. Used
CD...$4.99
One of the most hard-hitting Count Basie albums from the Roulette Records years – and that's saying a lot, given the power of Basie at the time! The set was recorded in Sweden, with a kind of triple-time energy that really has the whole thing burning right from the start – as the group' ... CD

Basie At Birdland (with bonus tracks)
Roulette, 1961. Used
CD...$8.99 (LP...$4.99)
A killer set from Count Basie – recorded during the height of his years at Roulette! The back cover of the record proclaims that "Basie Is Back Home" – clearly a bit by Birdland to lay claim to being the Count's home address, which is a bit of a challenge to his KC roots! ... CD

Chairman of The Board
Roulette, 1958. Used
CD...$5.99
Way before Sinatra first grabbed the "Chairman Of The Board" title for his own musical persona, Basie laid great claim to the tag with this tight little album for Roulette! The album's got the 50s Basie band working at the height of their powers – with original compositions written ... CD

Brilliant Corners
Riverside/OJC, 1956. Used
CD...$4.99 (LP...$199.99)
A brilliant title for this brilliant album from Thelonious Monk – a set that really has him coming back strongly in the second half of the 50s – with a new talent for arrangements that really goes past his previous work! Monk's piano and compositions are every bit as great as before ... CD

Eddie Lockjaw Davis Cookbook – Vol 3
Prestige/OJC, Early 60s. Used
CD...$14.99
Volume 3 of Lockjaw's classic early Cookbook sessions – cut for Prestige in a key transitional moment, when Lock was trying to break past the R&B roots of earlier years, and emerge as a more sophisticated jazz soloist, capable of carrying an idea way past the short format of singles and ... CD