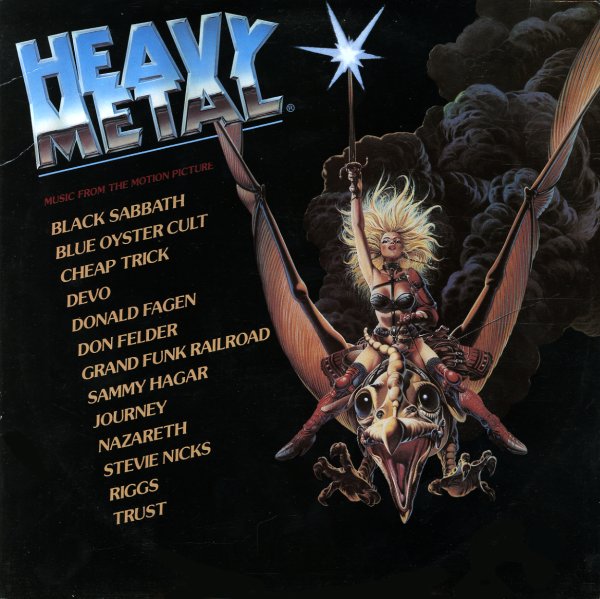 Not the record that introduced the world to the phrase "heavy metal", but instead a much-hyped full length animated feature film – based on the popular sci-fi magazine of the time! The music here has little to do with the story, but there are plenty of great late 70s major label rockers in the lineup – on a set of tracks that includes "I Must Be Dreamin" and "Reach Out" by Cheap Trick, "Heavy Metal" by Sammy Hagar, "Veteran Of The Psychic Wars" by Blue Oyster Cult, "Mob Rules" by Black Sabbath, "True Companion" by Donald Fagen, "Prefabricated" by Trust, "Blue Lamp" by Stevie Nicks, "Crazy" by Nazareth, "Open Arms" by Journey, "Queen Bee" by Grand Funk Railroad, "All Of You" and "Heavy Metal" by Don Felder, "Radar Rider" by Riggs, and "Working In The Coal Mine" by Devo.  © 1996-2022, Dusty Groove, Inc.

Midnight Express
Casablanca, 1978. Very Good
LP...$6.99
It's hard to believe that anyone ever took the electronics of Giorgio Moroder seriously enough to think they'd be the right setting for an intensely dramatic thriller like this – but in the decade when Italian thrillers were doing the same thing, it's kind of easy to see. And if you think of ... LP, Vinyl record album

Study In Terror
Roulette, 1966. Very Good+
LP...$9.99
British jazzman Johnny Scott leads a larger orchestra in a set of serious and dramatic pieces for this 60s film that paired Sherlock Holmes and Jack The Ripper (how many of these were made over the years?) The mood of the music is stark and dramatic – mostly going for the sort of string-heavy ... LP, Vinyl record album

My Geisha
RCA, 1962. Very Good+
LP...$7.99
Shirley MacLaine as a geisha? Weirder things have certainly happened on screen – but the film still definitely stands out as one of the odder 60s cinematic moments! Fortunately, Franz Waxman scores the whole thing with enough of a serious air to offset the silliness – and actually, ... LP, Vinyl record album