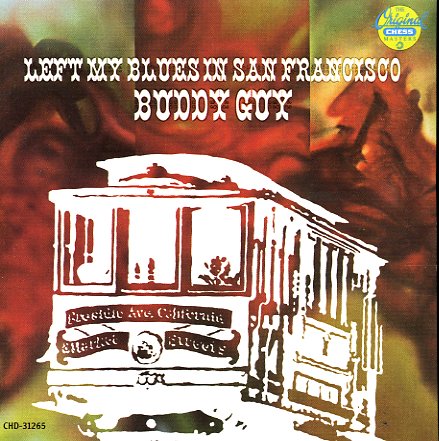 I Left My Blues In San Francisco

Not the Bay Area effort you might guess from the title – and instead a sweet Chicago session that's easily one of the funkiest records that Buddy Guy ever cut! There's a great mix of funk and soul mixed in with the blues – thanks to arrangements from Charles Stepney and Gene Barge, who groove Buddy up in the same new funky mode that Howlin Wolf and Muddy Waters got from Chess Records at the same time. A few cuts are more stripped-down and classic – but most have this great tight groove, with instrumentation by Stepney on some surprisingly funky drums, plus Matt Murphy on guitar, Phil Upchurch on bass, and Gene Barge on tenor sax. Titles include "Goin Home", "Buddy's Groove", "She Suits Me To A Tee", "Every Girl I See", "Too Many Ways", "Crazy Love", "Keep It To Myself", and "When My Left Eye Jumps".  © 1996-2021, Dusty Groove, Inc.
(Out of print.)