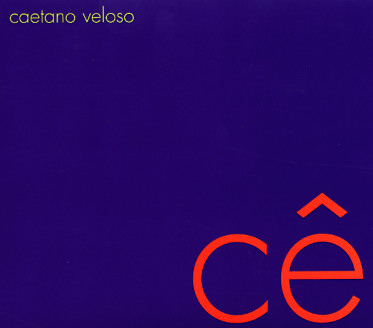 Another great chapter in the always-surprising later career of Caetano Veloso – and a record that's unlike anything else he's recorded before! The style here is a real change both from some of his more ambitious and more experimental works of late – and the album mostly features small combo backing, set up alongside Veloso's vocals in styles that are slightly punky, slightly arty – in a way that reminds us a fair bit of work from the hippest side of the New York scene in the early 80s. The structure of the songs is often simple, but extremely fresh – very inventive twists and turns of a few basic elements, all to match the poetry of Veloso's own lyrics. Moreno Veloso co-produced the set – and titles include "Outro", "Rocks", "Deusa Urbana", "Waly Salomao", "Musa Hibrida", "Odeio", "O Heroi", and "Um Sonho".  © 1996-2021, Dusty Groove, Inc.
(Out of print.)

Livro
Nonesuch, 1997. Used
CD...$4.99 (CD...$13.99)
A great 90s album by Caetano Veloso – a beautiful re-awakening of his genius in the later years of his career! The sound here is as fresh, creative, and personal as on some of Veloso's best post-Tropicalia albums of the 70s – served up in a blend of spare percussion, edgey guitars, and ... CD

Foreign Sound
Nonesuch, 2004. Used
CD...$4.99
A landmark album for Caetano Veloso – a full set of tracks sung in English, as beautifully done as we ever could have hoped! The arrangements are really fresh – in a style that makes the album far more than just a set of standards – and instead gives it the edgey approach of some ... CD