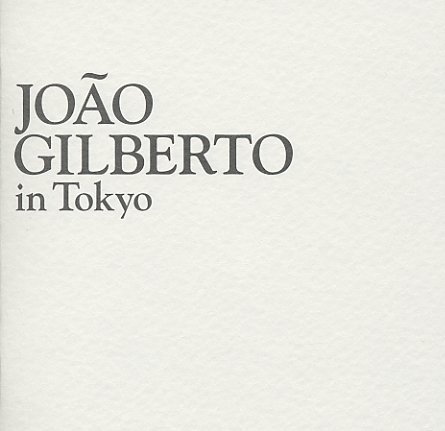 A beautiful recent live recording from bossa legend Joao Gilberto – the kind that shows that he's still very much in fine fine form! The set was recorded in Tokyo, and features Joao on voice and guitar – with no other instrumentation at all – replicating the feel of some of his sparest classic work, with a style and approach that seems even better with age. There's a waning sadness to the whole set that's really compelling – the weight of years that somehow makes classic tunes sound even more meaningful than before! 15 tracks in all – with titles that include "Aos Pes Da Cruz", "Bolinha De Papel", "Louco", "Pra Que Discutir Com Madame", "Doralice", "Este Seu Olhar", and "Preconceito".  © 1996-2022, Dusty Groove, Inc.
(Out of print.)

Samba '68
Verve, 1968. Used
CD...$11.99
One of the grooviest Verve albums of all time – a rare American session from Brazilian legend Marcos Valle – and his only US album to feature vocals! The album's even dreamier than Valle's early bossa sides from Brazil – and the setting has some nice Verve-like touches from ... CD

Once I Loved
Verve, 1992. Used
CD...$9.99
Incredibly great work from Toninho Horta – especially considering that the album's a US release from the early 90s! Horta's working here in a tight trio with Gary Peacock on bass and Billy Higgins on drums – both players we can trust to keep things real, and help Toninho hit a groove ... CD

Man From Ipanema (disc 2 missing!!!)
Verve, 1960s/1970s/1980s. Used 3 CDs
CD...$24.99
A beautiful package – as beautiful as the music of Jobim, and one of the true fitting tributes to his genius! The set is a retrospective of the work of Antonio Carlos Jobim – and it features tracks that stretch back to his early recordings for Verve, CTI, and Philips (from both the US ... CD

Jobim (aka Maita Pere)
Verve/MCA, 1973. Used
CD...$9.99 (CD...$14.99)
An incredible moment of genius from Jobim! The record features one of the best versions of "Aqua De Marco" ever recorded – done up in these haunting blue chords, backed by great baroque orchestrations, which descend and trail off, then come sweeping back in. The whole album's just ... CD

Aquarela Do Brasil
Verve/Philips (Germany), 1969. Used
CD...$11.99 14.99
A one of a kind record that still sparkles as brightly today as it did back in the late 60s – an amazing collaboration between Brazilian vocalist Elis Regina and Scandinavian jazzman Toots Thielemans – done in a style that easily makes it one of the best records ever from both artists! ... CD