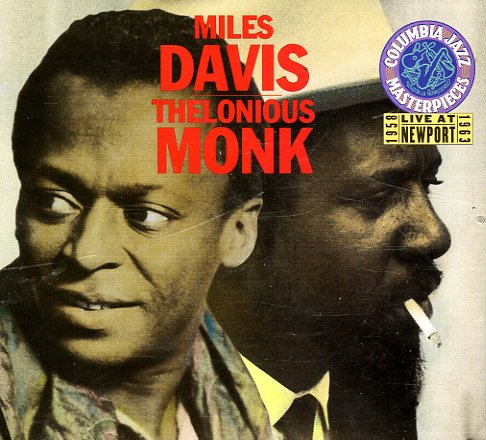 A slightly misleading record – but a great one nonetheless! From the title and cover, you might imagine that Thelonious Monk and Miles Davis were sharing the stage together at the Newport Jazz Festival – but instead, the album actually features separate performances by each artist – actually even recorded 5 years apart! The Miles Davis recording is from 1958 – a great year that has John Coltrane working with the group, alongside Wynton Kelly on piano, Cannonball Adderley on alto, Paul Chambers on bass, and Jimmy Cobb on drums – performing lively versions of "Ah Leu Cha", "Straight No Chaser", "Fran Dance" and "Two Bass Hit". The Monk material is even more unique – recorded in 1963, with Monk's usual quartet of Charlie Rouse on tenor, Butch Warren on bass, and Frankie Dunlop on drums – joined by the legendary Pee Wee Russell on clarinet – recently revived in jazz at the time, and displaying surprisingly modernist tendencies! Both Monk tracks are long – and include versions of "Nutty" and "Blue Monk".  © 1996-2022, Dusty Groove, Inc.
(Out of print.)