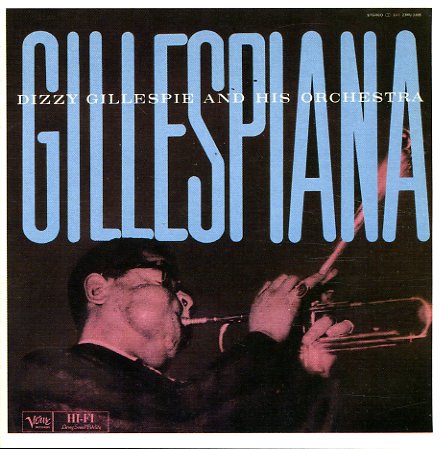 A great burner from Diz – and one that features a large group, long tracks, and some stellar early work from Lalo Schifrin! Schifrin was in Diz's group at the time, playing piano and contributing fantastic Latin-tinged arrangements that gave the band a whole new life. Other players on this session include Candido, Leo Wright, Julius Watkins, and Willie Rodriguez – and the tracks include "Africana", "Blues", and "Panamerica". An incredible live set from Dizzy Gillespie – one that has him working in stunning big band mode, but with all the depth and agility of a small combo! The set features variations on a number of classic Gillespie themes – including "Kush", "Manteca", "Ool Ya Koo", and "Tunisian Fantasy (Night In Tunisia)" – recast with that ever-growing Latin influence that Dizzy was picking up in the 60s, supported strongly by the presence of a young Lalo Schifrin, who plays piano on the set. Horn players include Dizzy, Clark Terry, and Nick Travis on trumpets; Gunter Schuller and Jim Buffington on French Horns; Leo Wright on sax and flute; and Don Butterfield on tuba – supported by rhythm from Schifrin on piano, Art Davis on bass, and Charles Lumpkin on drums. Tunes are awash in soulful solos and deeply colored hues – and titles include "Manteca", "This Is The Way", "Kush", "Ool Ya Koo", and "Tunisian Fantasy".  © 1996-2023, Dusty Groove, Inc.
(Out of print.)