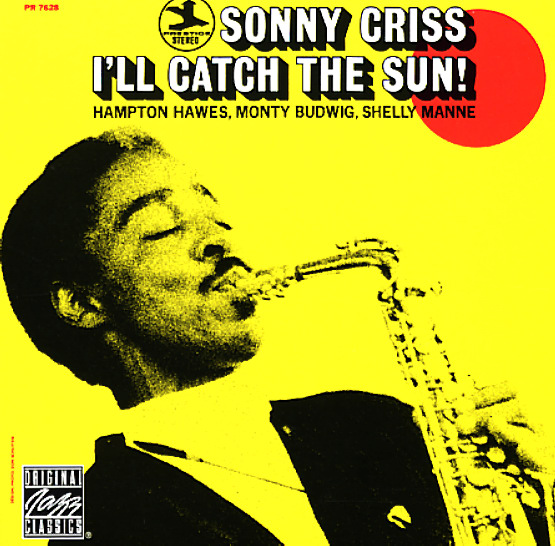 Excellent material from Sonny Criss' late 60's comeback period! By this point, Criss had a sound, style, and maturity that was unmatched by any of his LA contemporaries – a way of blowing the alto that was neither boppish, nor cliched in R&B modes – and instead burst forth with a sense of soulful sophistication that was quite unique! Sonny's sound here is incredible throughout – a clear, clean approach to his instrument that is quite different than his style of a few years before – and he's set up in a great little combo that includes Hampton Hawes on piano, Monty Budwig on bass, and Shelly Mann on drums. Titles include the killer "California Screamin" – plus "I'll Catch The Sun", "Blue Sunset", "Cry Me A River", and "Don't Rain On My Parade".  © 1996-2021, Dusty Groove, Inc.

This Is Criss! (with bonus track)
Prestige/OJC/ZYX, 1966. Used
CD...$6.99
A beautiful comeback LP recorded by LA alto genius Sonny Criss in the mid 60s – his first American session after a few years in France, and a few years off the scene back home! Sonny's time away had profound effects on his playing – and on this album, he returns transformed from the ... CD

Crisscraft
Muse/Savoy, 1975. Used
CD...$7.99
We never tire of the saxophone work of Sonny Criss – and this mid 70s gem is a perfect example of his brilliance! Sonny's sound on alto here is completely his own – raspily, soulful style that's really unique – and which draws strongly from Criss' rich life experience, including ... CD

Rockin' In Rhythm
OJC, 1969. Used
CD...$13.99
One of the best Sonny Criss albums ever – one of our favorites from his late 60s run at Prestige – and that's really saying a lot! The set's a warmly lyrical session that really has Criss opening up, changing up his groove to display the deep growth he'd experienced as a musician in ... CD

Soul Junction
Prestige/OJC, 1957. Used
CD...$4.99
Soul Junction's a great title for this one – because the album's a great meeting point between 50s hard bop and some of the looser, earthier styles that were beginning to show up in the first years of soul jazz! The title track of this one is worth the price of admission alone – as Red ... CD