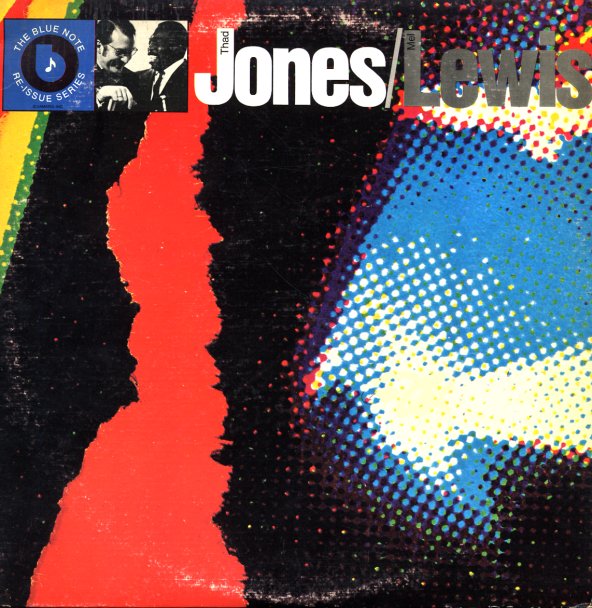 A great collection of early work from this legendary large ensemble – all pulled from their seminal late 60s sides on Blue Note and Solid State – with Thad Jones on flugelhorn and Mel Davis on drums – plus work from Richard Williams and Marvin Stamm on trumpets, Jimmy Knepper and Benny Powell on trombones, Jerome Richardson and Jerry Dodgion on alto, Billy Harper and Joe Farrell on tenors, and Pepper Adams on baritone!  © 1996-2022, Dusty Groove, Inc.
(Cover has light ringwear and some edge wear.)

New Life
Horizon, 1976. Near Mint- Gatefold
LP...$4.99
A wonderful start to the second decade of this ultra-hip group – an ensemble who started to reinvent the sound of the big band in the late 60s, then only picked up more and more energy once time went on! Thad Jones and Mel Lewis are a hell of a pair – not only great leaders for a ... LP, Vinyl record album

Suite For Pops
Horizon, 1975. Near Mint- Gatefold
LP...$19.99
Large group backings, with a bit of vocals from Dee Dee Bridgewater – and titles that include "Meetin Place", "The Summary", "The Farewell", "The Great One", and "Only For Now". LP, Vinyl record album

Delightfulee
Blue Note, 1966. Near Mint-
LP...$34.99 (CD...$12.99)
A really unique album from the great Lee Morgan – a set that features the trumpeter in two different settings, but in a way that really works well together! Most of the album has Lee blowing in a very cool quintet – with Joe Henderson on tenor, McCoy Tyner on piano, Bob Cranshaw on ... LP, Vinyl record album

Dexter Calling
Blue Note, 1961. Near Mint-
LP...$59.99
Don't take the cover the wrong way – because this isn't one of those "phoned in" sessions that seem to turn up way too much in contemporary jazz! The album's a real classic from Dexter's first big "comeback" period – and represents the strength of his Blue Note ... LP, Vinyl record album

Witch Doctor (Applause pressing)
Blue Note/Applause, 1961. Near Mint-
LP...$19.99
One of our favorite albums ever from Art Blakey and the Jazz Messengers – but a set that was unreleased by Blue Note for quite a few years! The set's one of two gems the group recorded in 1961, but which were held back until the end of the 60s – and it features a stellar version of the ... LP, Vinyl record album

At Club Baby Grand Vol 1 (70s pressing)
Blue Note, 1956. Near Mint-
LP...$14.99
Jimmy Smith heard in the kind of setting that spawned him – playing live at Delaware's Club Baby Grand – just the sort of smoky little jazz room that initially fostered his talents! The liveness of the set brings a really nice edge to the album – a sound that's grittier than some ... LP, Vinyl record album

Art Blakey & The Jazz Messengers (aka Moanin)
Blue Note, Late 50s. Good
LP...$99.99 (CD...$3.99)
One of Art Blakey's first true moments of genius! This transitional version of the Jazz Messengers included two parts – Lee Morgan and Bobby Timmons – of the holy Morgan/Shorter/Timmons trilogy, and it's also got the added bonus of Benny Golson on tenor, who was at the height of his ... LP, Vinyl record album