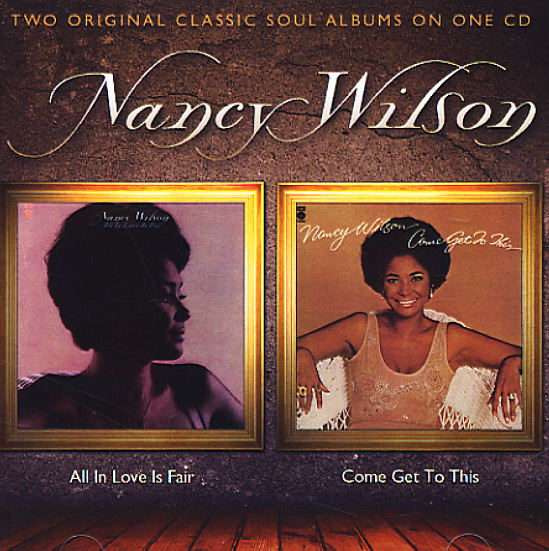 All In Love Is Fair/Come Get To This

A pair of great Nancy Wilson albums from the mid 70s in a single set! All In Love Is Fair is a sophisticated album of soul tracks arranged and produced by Gene Page, in a string-heavy, slightly-funky style that reminds us of Gene's work with Barry White at the time! The tracks are all pretty hip – and include titles written by Stevie Wonder, Johnny Guitar Watson, Thom Bell & Linda Creed, Billy Page, and Tennyson Stevens. No standout singles, but plenty of nice moments, and a good side of Nancy's career that isn't always given that much exposure. Titles include "Tell The Truth", "Try It, You'll Like It", "All In Love Is Fair", "There'll Always Be Forever", and "You're As Right As Rain". Come Get To This is a real sweet soul gem from '75. It also has arrangements and production by Gene and Billy Page – who give the record a great smooth 70s soul finish, and a feel that's a lot more unified than some of her other efforts from the decade. Nancy sings some great versions of "If I Ever Lose This Heaven" and "Come Get To This", plus the original tracks "Houdini Of The Midnight Hour", "Like A Circle Never Stops", "Boogeyin All The Way", and "Happy Tears".  © 1996-2023, Dusty Groove, Inc.

At The Crescendo (Japanese paper sleeve edition)
Capitol/Universal (Japan), 1959. New Copy
CD...$17.99 21.99
Great proof that Jeri Southern's a hell of a jazz singer in just the right setting – and this album's just the right setting! The set features Jeri live at the Crescendo – working with small group backing at the famous LA nite spot – including piano from Dick Hazard, who also ... CD

Gone For the Day (Japanese paper sleeve edition)
Capitol/Universal (Japan), 1957. New Copy
CD...$17.99 21.99
That's "gone" – as in the way June Christy really sends us – vocals that take us to a place that few other 50s singers could ever hope to reach! June's work here is a masterpiece of melancholic understatement – far less overblown than some of her pop contemporaries, but ... CD