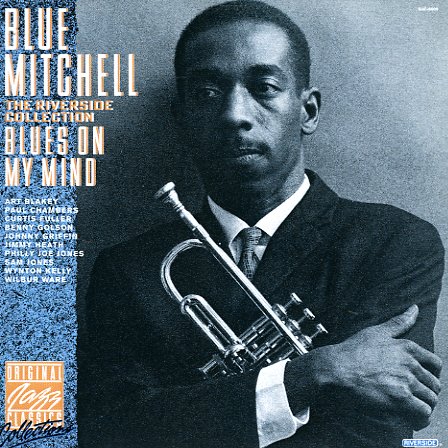 Blues On My Mind (with bonus track)

A nice collection of hard bop sides cut by Blue Mitchell in the late 50s for Riverside, taken from the albums "Big Six", "Out Of The Blue", and "Blue Soul". All selections on here are recorded with an all-star personnel – including his Big Six band with Curtis Fuller, Johnny Griffin, Wynton Kelly, Wilbur Ware, and Philly Joe Jones; his quintet with Benny Golson, Paul Chambers, and Art Blakey; and a later sextet with Jimmy Heath, and Sam Jones. Titles include "Brother 'Ball", "There Will Never Be Another You", "Blues On My Mind", "It Could Happen To You", "When The Saints Go Marching In", "Top Shelf", and "Blue Soul". CD includes bonus track "Park Avenue Petite".  © 1996-2023, Dusty Groove, Inc.
(Out of print.)

Thing To Do (RVG edition)
Blue Note, 1964. Used
CD...$18.99
The thing to do – is jam! Blue's sounding wonderful in this classic set for Blue Note – one of his best small group albums – recorded with a sound that's solidly in keeping with his lyrically melodic work in the Horace Silver group! The quintet features Chick Corea on piano ... CD

Boss Horn (RVG remaster edition)
Blue Note, 1966. Used
CD...$14.99
A wonderful album by Blue Mitchell – one that features some larger arrangements by Duke Pearson, and Blue's soulful trumpet soloing over the top! The use of Pearson is a great addition to the set – as it really sets Mitchell free to concentrate on the best shades, colors, and tones in ... CD

Cup Bearers
Riverside/OJC, 1962. Used
CD...$8.99
One of the first albums to really show Blue Mitchell's genius as a leader – recorded past the more formulaic bop modes of some of his other Riverside sessions, and handled with a lyrical edge that really gets at the best aspects of his playing. Of course, part of the reason for this is that ... CD

Complete Blue Note Blue Mitchell Sessions 1963 to 1967 (4CD set)
Blue Note/Mosaic, Mid 60s. Used 4CDs & Book
CD...$119.99
Fantastic early work as a leader from this hip trumpeter! The set features the great albums Step Lightly, Thing To Do, Down With It, Boss Horn, Bring It Home To Me, and Heads Up – plus a few unissued tracks. CD