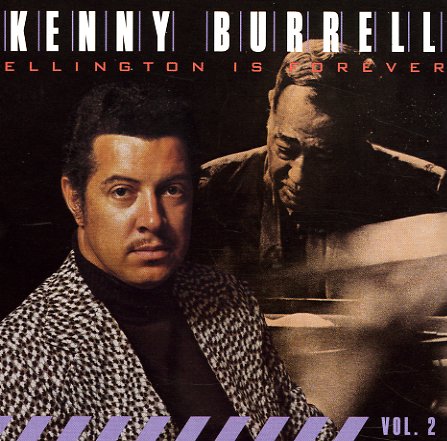 A second volume of Duke Ellington material from Kenny Burrell – and like the first, an extremely fresh look at the tunes – given the way things change up throughout the sessions! The presentation here is nicely varied – not just a big band take on the Duke, nor some small combo musings – but instead a mixture of both, all with Burrell's guitar at the center, but also moving the spotlight to a host of other players along the way – including trombonist Quentin Jackson, trumpeters Snooky Young and Thad Jones, organist Jimmy Smith, and tenorists Joe Henderson and Jerome Richardson – all of whom add some surprisingly soulful currents to the set. Titles include "Jeep Is Jumpin", "Solitude", "In A Sentimental Mood", "Azure", "Just Squeeze Me", "Come Sunday", "Prelude To A Kiss", "I Let A Song Go Out Of My Heart", and "Orson".  © 1996-2022, Dusty Groove, Inc.
(Cover has ring wear, edge wear, and a cut corner.)

Cast Your Fate To The Wind – Jazz Impressions Of Black Orpheus
Fantasy, 1962. Very Good+
LP...$24.99
A beautiful record of light, lyrical piano jazz – and one of the best-selling jazz albums ever on Fantasy Records! Vince Guaraldi started the set as a tribute to the film Black Orpheus – and some of the album features his nice renditions of Jobim/Bonfa tunes like "Manha De ... LP, Vinyl record album

Jazz At Oberlin (10 inch LP)
Fantasy, 1953. Very Good+
LP...$39.99
A classic album from Dave – recorded at Oberlin College, the mid-Ohio haven of bohemiana, and a growing hotbed of jazz activity centered around students in the college's conservatory of music. Dave and crew made the trip at the request of the kids – breaking from their mostly San ... LP, Vinyl record album

Dave Brubeck Octet
Fantasy, Early 50s. Very Good-
LP...$18.99
A full LP that combines early work by Dave Brubeck – pulled together from a few 10" LPs, and packaged in a nice cartoony cover. The record features the work of his octet – a group that gives a rare opportunity to hear Brubeck in a large group setting, and one that also features ... LP, Vinyl record album

Under The Sun (Arista Freedom)
Arista Freedom, 1973. Near Mint-
LP...$19.99
Chicago had the Art Ensemble of Chicago at the end of the 60s – and St Louis had the fantastic Human Arts Ensemble at the start of the 70s – a wonderfully creative jazz group who shared a lot of the same ideas of improvisation and artistic freedom as the AACM up in the Windy City! This ... LP, Vinyl record album