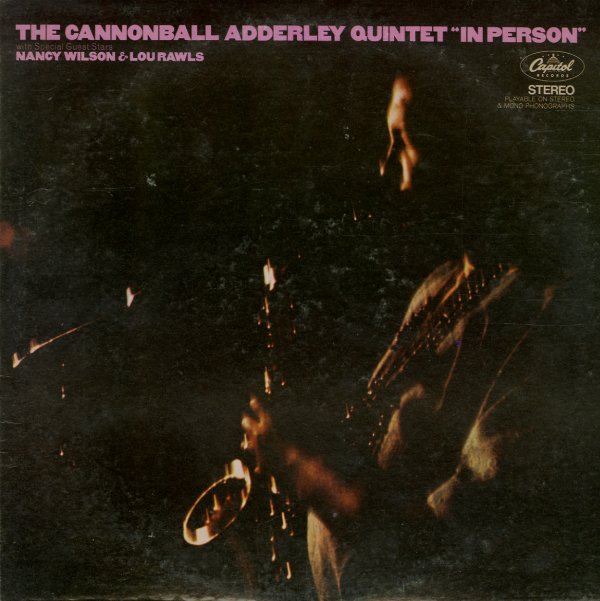 Almost everything soulful at Capitol Records in the mid 60s – packed together in one sweet little place! The set's a winner in a great line of Cannonball Adderley live dates from the time – produced by David Axelrod, and done with that great mix of angular, slightly electric groove the combo was virtually pioneering – thanks to help from Joe Zawinul on electric piano, and Nat Adderley on cornet! Cannon also plays some great soprano sax – an instrument that he was taking off beautifully with at the time – and sets fire to a few great tunes with the instrument. But as if that's not enough, Lou Rawls joins in on vocals on a few cuts, and Nancy Wilson comes in on a few more – and the album alternates singing with instrumentals in a really great way. Titles include two very nice extended tracks by Joe Zawinul – "Rumplestiltskin" and "The Scavenger", both of which are over 10 minutes long, and which have the group stretching out in a nice live vein – and other cuts include "The Scene", "Somewhere", "Sweet Emma", and "Zorba".  © 1996-2022, Dusty Groove, Inc.
(Rainbow label stereo pressing. Cover has some ring and edge wear, discoloration from age, and splitting in the top seam.)

Road Show
Capitol, 1959. Very Good- 2LP Gatefold
LP...$1.99
A great example of the Kenton powerhouse in action – a 90 minute double-live recording that really set a new standard for jazz sets of its type! The album features a side apiece dedicated to each of the three acts – one by Kenton's orchestra, one by Christy on vocals, and one by the ... LP, Vinyl record album