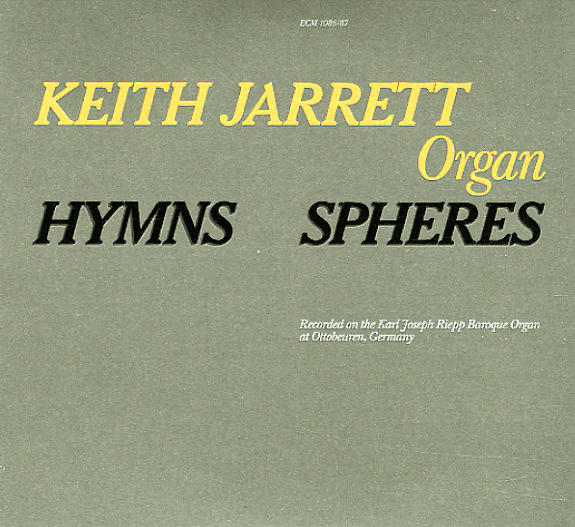 A very unusual record – one that has Keith Jarrett playing some solo organ – and a baroque organ at that – but in ways that are quite different than you might expect! The sounds here are amazing – almost noisy at points, as Jarrett really works the instrument in an exploration of textures and tones, less in a pursuit of melody – so what might initially look like one of Jarrett's neo-classical recordings is instead one of his most experimental – especially as the set moves on! "Hymn Of Remembrance" initiates the album – with a slightly sentimental quality – but Keith then shifts into his nine-part "Spheres" suite – which is full of amazing textures and sounds!  © 1996-2022, Dusty Groove, Inc.
(White label promo in the textured cover. Cover has some ring and edge wear and a promo stamp.)

My Song
ECM, 1978. Near Mint-
LP...$6.99 9.99
A really beautiful album – quite different than the solo or trio material by Keith Jarrett for ECM in the 70s – as the group is a quartet, with Jan Garbarek on soprano and tenor sax, Palle Danielsen on bass, and Jon Christensen on drums! LP, Vinyl record album

Eyes Of The Heart
ECM, 1979. Near Mint- 2LP Gatefold
LP...$19.99
Keith Jarrett hits some of the styles of his later ECM years – working here on both piano, soprano sax, and percussion – in a quartet with Dewey Redman on tenor sax and percussion, Charlie Haden on bass, and Paul Motian on drums and percussion. The first half features the long "Eye ... LP, Vinyl record album

Byablue
Impulse, 1976. Very Good+
LP...$9.99
There's a nicely warming vibe on this album from Keith Jarrett – a sound that's sometimes a bit more laidback and personal, but which is still carried off with familiar associates Dewey Redman on tenor, Charlie Haden on bass, and Paul Motian on drums! Most of the tunes are shorter ... LP, Vinyl record album

Mysteries
Impulse, 1976. Near Mint-
LP...$9.99
Dark and moody work from Keith Jarrett – a record that builds strongly off his ensemble feeling of the Impulse years, but which also seems to carry a bit more of the introspective vibe he was building up in some of his more stripped down solo recordings! The group's still a great one here ... LP, Vinyl record album

80/81
ECM, 1980. Very Good 2LP Gatefold
LP...$5.99
One of the most striking Pat Metheny albums of the period – as the set features the guitarist working with an all-star group that actually features 2 horn players! The group's a quintet, with Dewey Redman and Michael Brecker on tenor sax – blowing in open and spacious modes that ... LP, Vinyl record album

Matchbook
ECM, 1974. Near Mint-
LP...$6.99
Two of the greatest things going for ECM in the 70s – brought together on one record! The vibes of Gary Burton are a wonderful match for the careful guitar work of Ralph Towner – particularly his 12-string guitar, which is used in a space that's somewhere between folk and jazz, and ... LP, Vinyl record album