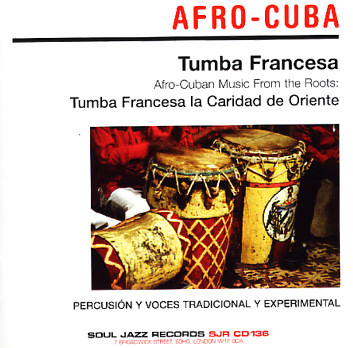 Afro-Cuban Music From The Roots

Rootsy Latin grooves from Tumba Francesca La Caridad De Oriente – a century old Cuban group dedicated to the preservation of older styles of music and performance! The set has a really earthy feel – recorded recently in Cuba by Soul Jazz Records, but with a timeless quality that takes us back to much earlier days of Afro-Cuban music. The performance is heavy on percussion and vocals – and although the album is a studio recording, there's almost an ethnographic feel overall. Notes are by Ned Sublette, and the album features an introduction to the music by poet Pedro Perez-Sarduy – with titles that include "Societe Guantanamo", "Tambores 2", "Muerive Yo Dila", "Camaguey", "Vamos A Dividir", and "Ven Mi Morena".  © 1996-2021, Dusty Groove, Inc.
(Includes slipcase.)