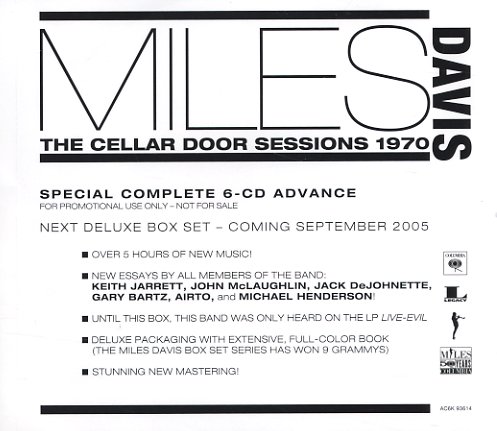 A long-awaited addition to the Miles Davis electric catalog – and a package that features over 4 hours of newly-discovered music! The 6CD set documents 4 nights of performance by Miles at the Cellar Door in Washington DC – recorded in December of 1970, and featuring a mindblowing group that includes Gary Bartz on soprano and alto sax, Keith Jarrett on Fender Rhodes and organ, Airto on percussion, Michael Henderson on bass, Jack DeJohnette on drums, and a bit of guitar from John McLaughlin on the last 2 CDs. There's a really hard and heavy feel here that's steeped in rock and soul influences – and the package is even more amazing, considering how little work has been offered from this unique point in Davis' career. Titles include "Directions", "What'd I Say", "Honky Tonk", "Sanctuary", "Improvisation #3", "Inamorata", "It's About That Time", and "Yesternow".  © 1996-2022, Dusty Groove, Inc.
(CONDITION NOTE: This is an advance copy of the box set minus the box and book – it is also missing discs 5 and 6. Discs 1-4 only!!!)