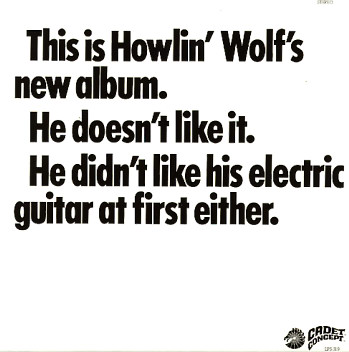 Howlin Wolf
Cadet
Cadet (label)
Get On Down
Get On Down (label)
Blues (CD, LP)
Soul (CD, LP)

A killer album of funky blues – recorded by Howlin Wolf during the period when Chess/Cadet was backing its older artists up with some of the newer funk musicians it had working in its studios! The overall sound works quite well – and although purists at the time moaned at the way artists like Wolf, Etta James, and Bo Diddley were being handled (especially with a "we know better than them" message on the cover like this!), the funky blues records from this time actually seem to be some of the most enduring from Chess – especially with younger listeners in the 21st Century! A big part of the success here goes to producers Charles Stepney and Gene Barge – who helped bring together a younger batch of players for Wolf's backing – including Pete Cosey and Phil Upchurch on guitars, Louis Satterfield on bass, and Morris Jennings on drums. Titles include "Spoonful", "Tail Dragger", "Smokestack Lightning", "Red Rooster", "Evil", and "Down In The Bottom".  © 1996-2021, Dusty Groove, Inc.