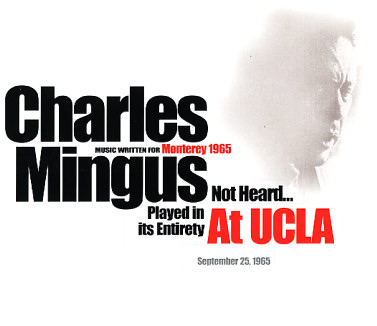 A rare rare landmark from Charles Mingus – music written for the 1965 Monterey festival, but (as the title indicates) not played at the festival! The recording was done later, at UCLA, with a group that includes Charles McPherson, Julius Watkins, Jimmy Owens, Hobart Dotson, and Howard Johnson – and it features a large group of horns, playing in some of Mingus' most sophisticated arrangements of the 60s! There's still a tremendous amount of fire in the work, as you'd guess from titles that include "Don't Let It Happen Here", "Don't Be Afraid The Clown's Afraid Too", "Once Upon A Time There Was A Holding Corporation Called Old America", and "They Trespass On The Land Of The Sacred Sioux". The album was originally only issued on Mingus' own label, available only by mail – and is presented here as a well-done 2CD set complete with some spoken introductions.  © 1996-2022, Dusty Groove, Inc.
(Out of print. Mark through slipcase barcode.)