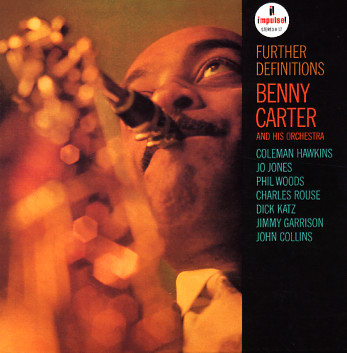 A key later album from alto saxophonist Benny Carter – one that has him at the helm of a largeish group, but playing with a nicely focused sort of groove! In addition to Benny's alto, the record also features tenor sax from Charlie Rouse and Coleman Hawkins, plus one more alto from Phil Woods – supported by rhythm from John Collins on guitar, Dick Katz on piano, Jimmy Garrison on bass, and Jo Jones on drums. The tunes are traditional, but have some sharper-edged modern ideas on some of the solos – and there's a nicely echoey feel to the production, which further adds to the quality of the record. The album's a bit like a Swingville session for Prestige, but has a bit more going on – and titles include "Doozy", "Blue Star", "Midnight Sun Will Never Set", and "Crazy Rhythm". CD also features a full bonus album – the record Additions To Further Definitions!  © 1996-2022, Dusty Groove, Inc.
(Out of print, digipack has some light wear, small tear on back cover)