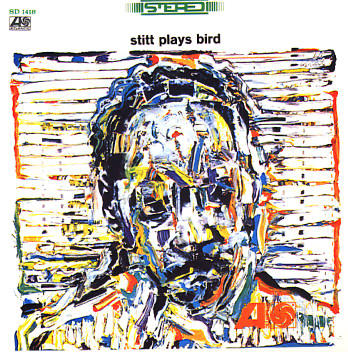 After years of staying free of comparisons with Charlie Parker, Sonny Stitt steps confidently into a set of compositions by the late, great one – sounding really wonderful in his own interpretations of these classics! The album's got the same simple and focused still as Stitt's best work on Roost – and although the compositions are all by Bird, the overall sound is still very much Sonny's own – especially given the wonderful sense of space and timing brought to some of the performances! The group's an unusual one, especially for Stitt – and features John Lewis on piano, Jim Hall on guitar, Richard Davis on bass, and Connie Kay on drums – all offering a slightly more modern take on Bird than might be expected – especially through the angular lines on Hall's guitar. Titles include "Ko Ko", "Confirmation", "Ornithology", "Parker's Mood", "Au Privave", and "Constellation".  © 1996-2021, Dusty Groove, Inc.
(Mono red & purple label pressing. Cover has a small cutout hole.)