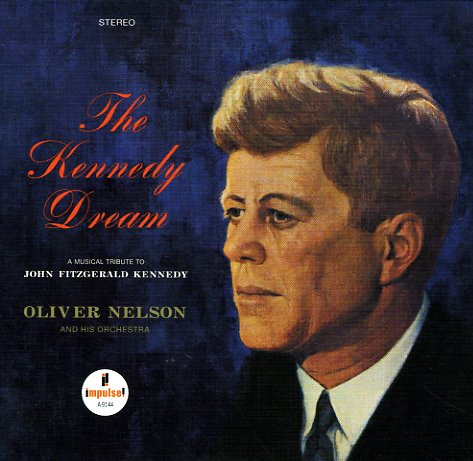 A great little album – a lot better than you might think from the concept! After the death of JFK, Oliver Nelson penned this extremely strong tribute to the man – featuring snippets of speeches made by Kennedy during his time in office as president, used as bridges between jazz based backings by Nelson that are filled with some of his strongest writing of the time. The notes are more devoted to Kennedy's memory and Nelson's genius than the usual liner notes – so we're not sure who the players are – but the overall style is right up there with some of Nelson's best serious work from the time, and features a striking use of strings against jazz solo instrumentation, almost in a manner that recalls Ralph Burns' best styles of the 50s. Titles include "The Artists Rightful Place", "Jacqueline", "Day In Dallas", "Let The Word Go Forth", and "John Kennedy Memory Waltz".  © 1996-2022, Dusty Groove, Inc.
(70s green label ABC/Impulse pressing. Cover has some ringwear and a cut corner.)

Afro/American Sketches
Prestige, 1961. Very Good
LP...$9.99
One of the first larger concept albums from Oliver Nelson – and a set that really marked a strong step forward as a jazz arranger! The album is one long suite – as you might guess from the title – with righteous themes that deal not just with rising independence in postwar Africa ... LP, Vinyl record album