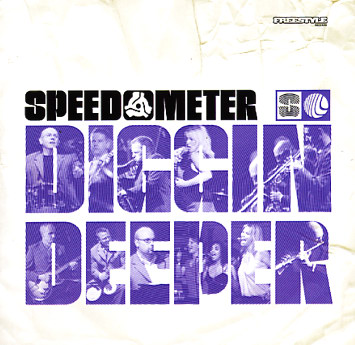 A wealth of rare early work from the UK's Speedometer – tunes that were initially pressed up only as limited edition singles on labels like Timmion, Soul Fire, and Kennel Klub – all brought together here for the first time on CD, along with a few previously unissued numbers! Speedometer have definitely been one of the heaviest funk combos going on the other side of the Atlantic for a number of years – a Meters-influenced group with plenty of bass and scratchy guitar at the bottom of their tunes – but also a great talent for blasting the horns way way over the top, and changing up the rhythms with a tightness that few other combos can match! The whole CD's a delight all the way through – and is just about the only way you'll find these tracks anymore. Titles include "Soul Safari", "Speedometer (parts 1 & 2)", "Descarga D'Escargot", "It's My Thing", "Two Beat Beast", "Upstairs At Boston Road", "Up The Down", "Ain't Going To Thursford (parts 1 & 2)", "Hold The Bus", "Time For Change", and "Accra International Airport".  © 1996-2021, Dusty Groove, Inc.

This Time
Freestyle (UK), 2011. Used
CD...$9.99
A bold step forward from Lack Of Afro – the modern funk & soul vehicle of producer, DJ and song stylist Adam Gibbons! The slew of singles and trio of full lengths that we'd heard prior to This Time have all been really impressive – a mix of breakbeat funk era and classic ... CD

Music For Adverts
Freestyle (UK), 2014. Used
CD...$9.99
Lack Of Afro are back, and fiercer than ever before – really evolved from just a name known for funky remixes and dancefloor grooves, and stepping forward strongly into a much more well-rounded, deeply soulful group! The title's a reference to older Brit sound library albums, but the overall ... CD

My Groove Your Move
Freestyle (UK), 2009. Used
CD...$9.99
A diverse, far reaching approach to funk flavors the second full length from Lack Of Afro – who may lack the follicles, but aren't lacking the love – with a more sophisticated and confident feel this time out! The crew follows through on the promise of the debut here, continuing their ... CD