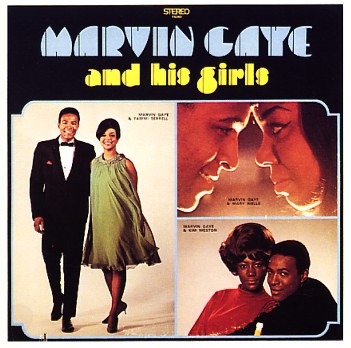 A classic batch of Motown duets from Marvin Gaye and some of his best female co-stars – with a few contributions apiece from Mary Wells, Kim Weston, and Tammi Terrell! Although other artists explored the male/female duet mode back in the 60s, few did it as well as Marvin – thanks in part to a warmly sensitive vocal approach that made his duets come across as personal, loving conversations – and not the too-gimmicky modes used to push the big stars over at other labels. Marvin & Mary Wells sing "Once Upon A Time", "What's The Matter With You Baby", "Together", and "Deed I Do". Marvin & Kim Weston sing "I Want You 'Round", "What Good Am I Without You", and "It Takes Two". And Marvin and Tammi Terrell sing "Your Precious Love", "Little Ole Girl, Little Ole Boy", "I Can't Help But Love You", and "Good Lovin Ain't Easy To Come By".  © 1996-2021, Dusty Groove, Inc.
(Out of print and still sealed!)

United
Tamla/Motown, 1967. Used
CD...$14.99
Fantastic soul duets between Marvin & Tammi Terrell – a landmark pair in 60s soul music, and easily one of the best male/female duos in pop music ever! Marvin and Tammi have a way of singing together that makes you feel like they're speaking the tunes, not singing them – a personal ... CD